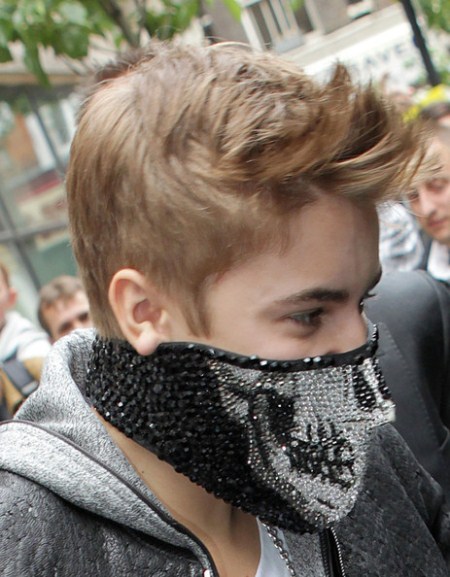 In London today, Justin Bieber was wearing a mask that only covered his mouth and it was a skull pattern that was studded, it actually looked pretty damn stupid. I’m not sure if Justin really wanted to look like an idiot, but he did exactly that. Maybe he’s doing the world a favor and cutting off his supply of oxygen so he can’t sing, or maybe he’s just an immature little brat!

Many people could say that this little stunt was to copy Michael Jackson who would tie a handkerchief around his face as a mask to keep exhaust fumes and such from entering his lungs. But that’s as far as the similarity between the two go, Michael was an iconic pop star that the world will most likely remember forever. Justin Bieber on the other hand is just a pop star we’re waiting to just die off from the music industry; his music could make a sloth run a marathon in sheer terror. A masked crusader! His special power is high frequency sounds from his horrible music that makes the enemy faint or in extreme cases, even die.

Justin probably wore this for either two reasons, he thought it was cool looking like an idiot or that he wanted something to make him be the center of attention. Well our attention has been taken and he does not look “cool” whatsoever, he looks like a lesbian biker to be honest, so I don’t see where he could find coolness in that.