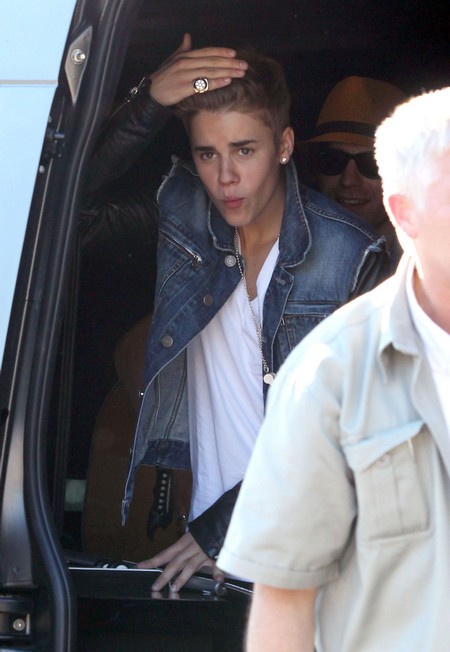 Justin Bieber was recently being interviewed with ‘Mojo in the Morning‘ and hung up during the interview because he just couldn’t take a joke about having to hide his mother from Harry Styles, since the One Direction star is known to date older women.

In the beginning of the interview everything was fine, Justin Bieber was happy with the compliments he was getting over his new album ‘Believe’ and also found it funny when informed that a doctor discovered Bieber Fever (more like a new obsessive disorder if you ask me) anyway all was going well. But when Mojo mentioned how he thought the song “Boyfriend” sounded like a Justin Timberlake song, Bieber got real upset about it. He even said, “Saying I sound like someone else is not really a compliment.”

Someone obviously sounds like he’s butt hurt, he has a real problem when being compared to Timberlake when he should honestly be grateful. Timberlake is in all ways a much better performer and singer then Bieber.

Even though Bieber was in a pissy mood, Mojo kind of cleared up the whole ordeal and moved on with the interview. Once again everything seemed fine until Mojo made a joke about Harry Styles dating Bieber’s mother. Mojo said, “Do you worry about Harry around your mom since he likes older women?” Justin comes up with a really snarky and lame reply and says, “I think you should worry about your mom bro.” Mojo replied with, “Justin, my mom’s dead. So unfortunately, it wouldn’t work”

Justin acted like a man and hung up on Mojo – which was the right thing to do – I don’t thing Mojo will be chatting with Justin again anytime soon.  Mojo kind of took the whole thing in stride and was prepared to continue – but Beiber was gone!  Mojo was way out of line here – you don’t make jokes about people’s moms and sex – let alone on the radio – where is Scooter Braun when you need him!