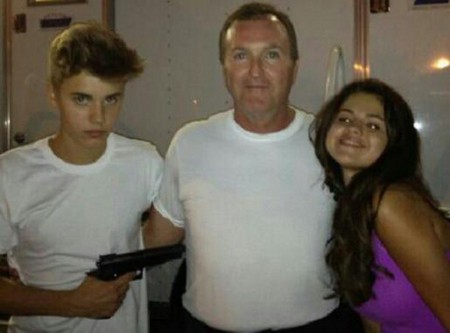 Justin Bieber – gun? WTF? Justin visited his girlfriend, Selena Gomez, on the set of her new film, Feed the Dog this week and decided to bring his dad, Jeremy Bieber along for the fun.  The three were goofing around and Justin decided to tweet a photo of him holding a fake gun to his fathers side as Selena hammed it up for the camera. While it looked like a moment of silliness the photo was seen by millions and not everyone was amused. Coming on the heels of the Colorado movie theater shootings and then just last week, three died near the Empire State Building thanks to a gunman- well, it just wasn’t cool.

Gun violence in the U.S is a serious problem that eventually touches most people in one way or another.  Either you’ve lost someone close to you or else you have a friend that has been affected by the use of a gun. It’s not a laughing matter and many are now demanding that Bieber apologize for his insensitive misstep because he has quite obviously offended many in the same fan base that ultimately pays his bills.

“Guns are on everyone’s mind as a serious crisis in Canada and the United States. Everyone, that is, except maybe Justin Bieber,” wrote a journalist from Canada‘s Globe and Mail.

While the photo was intended to be a joke, I have to wonder.  Bieber is holding a (play) gun on the man who all but abandoned him and his mother until his singing career took off. Then Jeremy popped back up ready to ride his sons’ coat tails and profit in any way possible.  If Bieber wanted to pull a real gun on someone, wouldn’t it be this guy?  Tell us your thoughts in the comments below!

Editor’s note – Will we be seeing little Justin starring soon in a production of Oedipus Rex? If you asked the Biebs he’d probably say something like: ‘Oedipus Rex eh? That’s a dinosaur, right! Is it going to be like Jurrasic Park!?‘

Editor’s next note – The man in the pic is not Justin’s dad, Jeremy Bieber, but Selena’s dad, Mr. Ricardo Gomez – Whoops!!