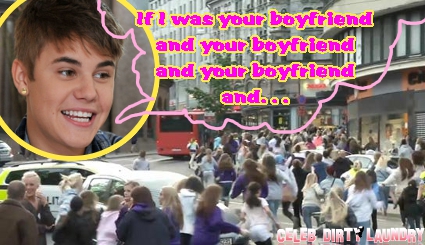 Justin Bieber exudes too much star quality — so much, in fact, that his mere presence in Oslo, Norway yesterday caused complete and total pandemonium to occur, which resulted in nearly 49 injuries and 14 ambulance calls. As far as we know, no deaths resulted from the chaotic fandemonium; however, the mayor of Oslo, Fabian Stang, isn’t happy about the situation and is calling for a complete investigation.

TMZ reports that Mayor Stang allegedly had to hide behind a tree at one point, simply to avoid getting trampled to death! One thing we know for sure: Beliebers don’t let nothin’ stand in between them and their holy figure!

“I have already called on the Emergency Planning Agency to examine the entire event from the planning stage to its implementation,” Stang says. “We have to find out what went wrong and why it happened.”

As we said yesterday, Oslo was nearly forced to declare a state of emergency as thousands upon thousands of screaming fangirls and fanboys hurled the city into a state of panic. All I can say is that it’s a good thing officials are looking into how they can improve public safety in the future because, whether there’s a pop superstar present or not, herds of people can’t be running through the streets like wild animals.

What do you think about all this craziness? Can you believe the incredible influence one celebrity can have over the population? Crazy to think about, isn’t it?