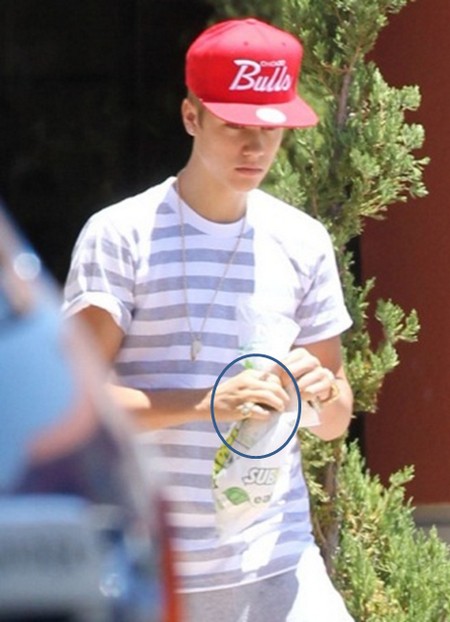 Justin Bieber got gifted a $30,000 friendship ring! Now wait don’t get excited, it wasn’t from Selena Gomez. Big Sean gave Justin his first ring and here’s how Biebers’ manager Scooter Braun says it all went down according to Media Takeout.

“When they first met, Sean has this ring. It was his first ring he ever bought, the first piece of jewelry when he got his record deal.   He gave it to Justin [at the ‘Today’ show]. He said, ‘I know you said you liked it, and I want to say thank you for involving me in the process and being a part of this. And I want you to have the ring.’   And he took it off, and Justin put it on and it was a real genuine moment. They’re friends.”

Now wait a minute, the first ring you’ve ever bought?  Would you  just give it to some kid because you’re “just friends”?  Lets not forget it also cost Big Sean $30,000 to buy the ring? This just doesn’t make sense, if I had a ring like this I’d treat it like Gollum (Lord of Rings)  would and kill the people who tried to take it from me.

I’ve also just got to say off the bat, giving a ring to another guy as a gift is incredibly strange, unless you are gay and there is some romantic implication, then it makes sense.   So maybe this ring was more than just friendship, in fact is it possible that Big Sean is crushing on The Biebs?

All of Biebers female Beliebers are screaming NO, can’t you hear them?  I wouldn’t even be surprised if some of The Beliebers went crazy at Big Sean after they hear this. A rabid Justin Bieber fan is nothing to take lightly; they could be the most terrifying thing on our planet and perhaps that is the real reason why aliens have never landed here.  Watch out Big Sean!