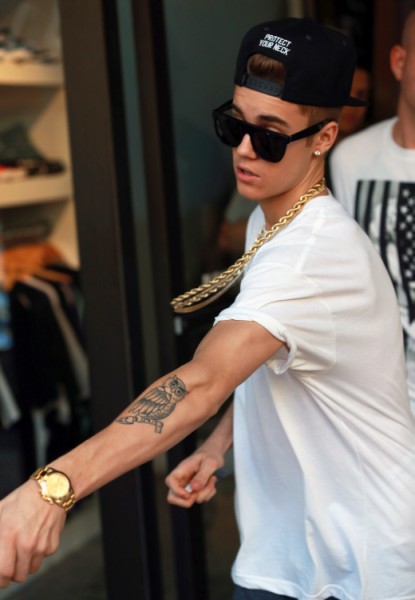 Is all the attention and pressure starting to get to Justin Bieber? His baby-faced, goody goody persona might be tumbling around him as news spreads that he spends his time smoking pot all day long while bossing people around like the petulant child that he is.

A source told The New York Daily News that Justin doesn’t care that his recent bad boy behavior is annoying his close circle and is only focusing on getting everything his little heart desires.

The story takes a look at a couple recent PR blunders including his swipe at Manny Pacquiao after he lost his fight and the hamster episode. No, I’m not referring to a Richard Gere-type hamster episode (or was that a gerbil?) but the one involving Bieber giving his pet to a fan and then getting charges with animal cruelty which is pretty must the stupidest thing I’ve ever heard.

So those actions, along with his new pot addiction and his back and forth relationship with Selena Gomez, are enough to get people worried that Bieber’s going the whole Britney Spears route and alienating his fans. Is this why Selena was cajoled back into Beiber’s snow bunny arms? Is Selena being asked to take one for the team to keep Bieber calm and dutiful? Why else would she get back together with him? He’s a spoiled child! Dating him has got to be the most exhausting thing ever! But perhaps she keeps him grounded so it’s in everyone’s interest if she puts a few more months in. She gets the exposure she needs to grab a few move movie deals, their managers keep making money, and Justin’s tizzy fits subside until something else doesn’t go his way. It’s win/win/win.

Do you believe Justin Bieber smokes pot all day long? Do we even care? Maybe he needs it to mellow out because he sounds like a little hellion. Also, I can’t stand his owl tattoo. It bothers me to no end. Thoughts?