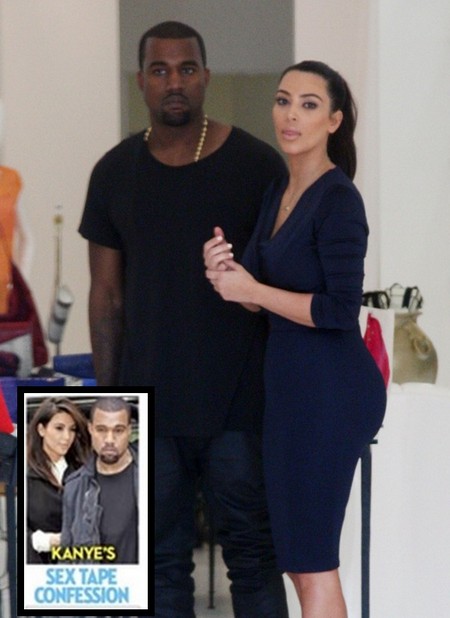 OK! magazine’s latest cover features a story about Kanye West’s true feelings about  Kim Kardashian’s sex tape with former boyfriend, Ray J. It appears Kanye can rap to his heart’s delight about sex and gold-digging women but just don’t ask him to watch the tape that made Kim a household name.

The magazine insists that Kanye bashes the tape and is uncomfortable with everyone knowing what his girlfriend looks like under the bed sheets. This is a very different tune than the one Kanye’s friends were singing on his behalf just a few weeks ago. According to Hollywood Life, a source close to Kanye said the controversial rapper is proud of Kim’s game and isn’t ashamed of her in the slightest. “Kanye is not at all trippin’ on Kim’s interview with O or the fact they brought up Ray J. It is what it is and that was like five years ago. A lot of girls f**k in the industry but where are they now? Kim f**ked on tape and became an international icon and made [many] millions. So to me, she’s gangsta. These other girls got the game [messed] up, not Kim, and I think that’s why Kanye is so drawn to her and supports her and doesn’t give a [crap] about her past. He likes her for her and respects the fact she came up in the game. Everyone hates on her and [lots of] people hate on Kanye too. You think they care, really? Jealousy and envy fuels people like them. It only makes them stronger.”

I don’t know. What do you believe? I tend to think a guy like Kanye would have a hard time with Kim’s sex tape past. Kanye wants Kim to be his Beyonce and Beyonce has a pretty sparkling clean reputation in an industry not exactly known for classy behavior. There were rumors that Kim was going to call it quits with Kanye. Do you think the sex tape bashing  has become an issue for the couple? I might just have to pick up the magazine and find out!