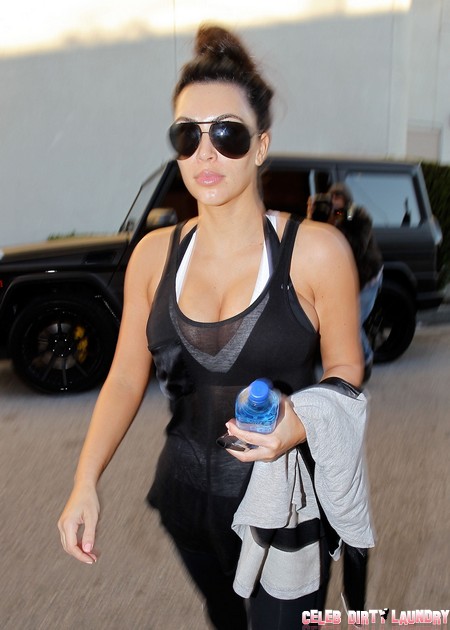 Kanye West is spending Christmas with his pregnant “perfect bitch,” Kim Kardashian, and her perfect family, the Jenner/Kardashian clan of  famewhoring freaks. It has been quite a year for Kanye West and Kim Kardashian. The two grew closer, first hooking up last spring and they’ve been pretty inseparable ever since.  Kanye has traveled the world with Kimmie and even made a few appearances on her reality show, but when it came time to unveil the Kardashian family Christmas card, he was missing from the photo.  Don’t be fooled by that, he is deeply entrenched with the family and Kim’s brother, Rob Kardashian has confirmed that Kanye will spend Christmas with their whole family.  Kanye is invited to Kris Jenner’s annual Christmas Eve party and it’s the kind of bash that everyone spends the night afterward. He’ll be with Kim and her family to open presents for their first Christmas together.

In case you’ve somehow missed some of the most recent photos to pop up on the web, Kim has gained a ton of weight in the last few months and naturally that has led to some serious pregnancy rumors. Add to that the fact that Kim is beyond vocal about wanting babies, like yesterday. She has tried marriage a few times with disastrous results so maybe this time around she’s thinking if she has the baby first the end result will be better.

Perhaps it’s true and Kanye and Kim’s biggest gift to the rest of the family this year will be the announcement that they’re expecting a baby. I think it would make momager Kris Jenner especially happy. Her parenting skills are always called into question but I have to think that Kris is probably a better mother than Kim could even hope to be. You know as well as I do that Kris loves when her girls make her look good!

Is there a new Kardashian baby on the way or is Kim just so comfy with Kanye that she has quit watching her figure? Tell us your thoughts in the comments below!

Editor’s note: Last year the family elders, Bruce Jenner and his lovely wife Kris, each received a personal vat of Botox and another face lift for Christmas. Kris Jenner also got breast implants. This year, after watching the daughter-by-another-father make a fool of herself hosting the X-Factor, the entire clan is kicking in for Khloe to get a new, less grating, voice and a working brain.

Reality star Kim Kardashian and her rapper boyfriend Kanye West leave the gym after a morning workout on December 22, 2012 in Studio City, California. Kim looks like she’s starting to pack on some extra holiday pounds in the form of “side boob” under her armpits… Hopefully she’s incorporated some lat pullovers and supine chest flys into her exercise routine!