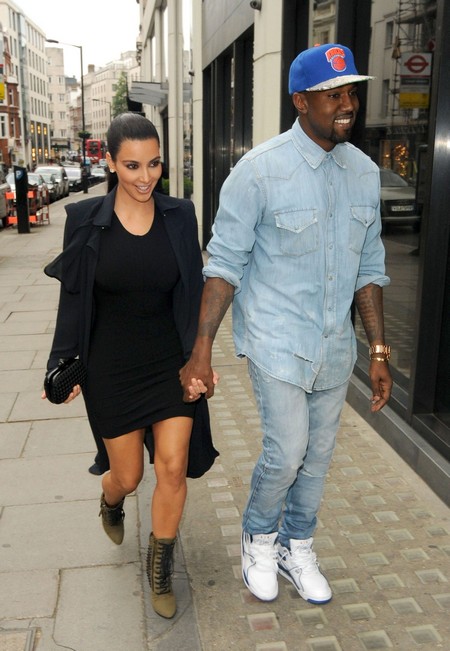 Kanye West has entered his own private hell as bossy and jealous Kim Kardashian is taking control and acting like a jealous and possessive bitch.  More Kardashian Drama! If it’s not one thing it’s another!  Here she goes again.

Kim Kardashian again is throwing her big butt around in London.  Apparently she did not like the fact that there were girls hanging around backstage on the tour “The Throne“, talking to Kanye West, who remember chicas’  “they’re just friends” isn’t that what she said –just friends my BUTT.

Well Kim told him basically to get them out of there because she did not like how “friendly” he was with them, Oh please!  Kanye agreed with her.

The next thing Kim K did was, she and Kanye were at Jay-Z’s manager’s birthday party in London and because Kanye was talking to Stella McCartney too much, about fashion, they had to leave, too chummy I guess.

I don’t know, but do the Kardashian women always have to be in charge.  She is actually ordering Kanye around and he is taking it Wow, I’m personally waiting for the explosion to set off because if you’ve seen any of my previous articles I told its tick tock with him.

All of this yes dear stuff is not going to last because chicas’ he does not have a good history with relationships.  Now Kim K what else can I say she has a terrible reputation and apparently it is so bad that allegedly Beyonce will not be photographed with her because she does not want to be associated with her.

Beyonce keep your class because this chica seems to always want, allegedly, the man with the most money, so watch your husband.  Let’s all watch and see!