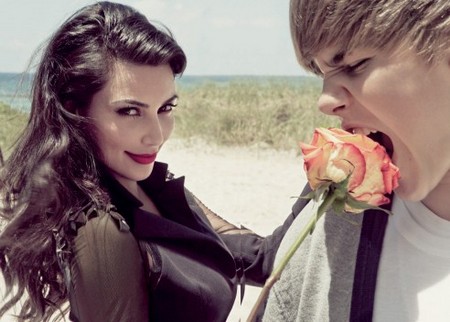 Justin Bieber thought that all women in the world wanted only him. But the boyfriend of Selena Gomez is hurt that Kim Kardashian chose Kanye West and didn’t even call to tell him.  All this mock drama occurred when Justin and Kanye worked together in the studio on the Bieb’s Believe album.

Bieber jested that Kanye was “just taking my women,” in reference to the Kimster and continued complaining that she dumped him without so much as a telephone call, saying: ‘Ye. “She didn’t even call me! It was crazy.”

But aside from the fun and games showing off Justin’s rapier-like wit it seems the two superstars hit it off smashingly.

“Just being in the studio with him, he’s just so creative and everything he says, he means it, and he’s just really smart,” Bieber told MTV News on Thursday during the “MTV First” premiere of his ‘Boyfriend’ video. “So I think it’s always great to get into the studio with those people.

“Basically, he was just talking about going out of the box and doing things that are different,” he continued. “And he’s like, ‘I want to just make you cool.’ He wants to just basically do records that people wouldn’t necessarily think I would do.”

He added that West was incredibly kind to him while they worked together, never criticizing him, but instead giving him lots of props. “He never gave me advice on my rapping, but every rap record that I played him, he’s like, ‘Yo, that’s your best one!’ He’s never said, ‘I don’t like that.’ He’s always been super supportive.”

So there we have a happy Justin anecdote – the lad gets some tutelage from an old master who didn’t make fun of his rapping.  Wow, Kanye really does have self-control!