Kate Hudson Jealous Of Gwyneth Paltrow, Acting Like A Diva On Glee Set 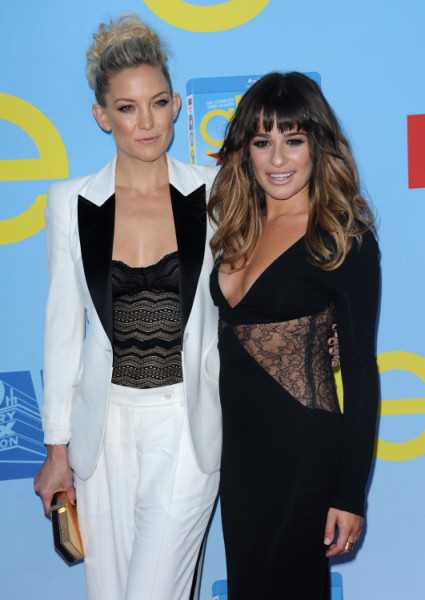 Perhaps Kate Hudson isn’t all peace, love and rainbows because her competitive (and vain) side has been coming out during her six-episode guest spot on Glee and not everyone is pleased with American’s sweetheart.

So I guess Kate has been pitching a fit because she thinks she looks ugly on the show. Apparently her character is an alcoholic and she’s supposed to look hard but Kate couldn’t stand it so she brought in her own people to make her look like a constant ray of sunshine. Ya, I buy it. It’s bad enough she’s doing TV, she can’t do TV and look like crap. Let’s save that for the Lindsay Lohans. Oh but there’s more. She’s also nursing a grudge against bestie Gwyneth Paltrow. Kate Hudsons’ annoyed that people aren’t falling all over her like they did when Gwyneth guest-starred on the show. Well, all I have to say about that is that Gwyneth is Gwyneth. She has created an empire out of making people feel beneath her. I don’t know what Lea Michele diva-like antics Kate’s throwing around on set but I’m sure they’re child’s play compared to the shit Gwyneth throws down.

The National Enquirer (via Celebitchy) has the scoop:

Kate Hudson was so freaked when she saw her face on “Glee” she paid her own makeup artist to fix it up, say sources.

“Kate thought she had what she called ‘Hollywood face’,” an insider told The Enquirer. “She complained that her makeup was over the top, and she looked more like a wax statue than a person!”

Kate signed on for a plum six-episode guest gig on “Glee,” playing an alcoholic dance instructor riding roughshod on Lea Michele’s character Rachel. But when Kate saw her face on the small screen during the season premiere, she lost it, revealed the source.

“Kate was horrified by how she looked,” the insider said. “She usually plays the romantic lead in movies, which means everyone works hard to make her look flawless. But on Glee, it’s not all about her. Besides that, producers wanted Kate’s character to look icy and over the top, and that’s exactly what they got. Kate got the OK to bring in her own makeup artist and paid the tab herself. It was worth it to her to look her best. Everyone on the show wants her to be happy, but most of the team thought she was being ridiculous.”

Kate’s also desperate to measure up to Gwyneth Paltrow, who won an Emmy for her 2011 guest gig on Glee. “Kate loves singing and dancing, and she’s jealous that some reviewers have compared her less than favorably with Gwyneth,” said the insider. “She’s out to prove that anything Gwyneth can do, she can do better.”

I have a problem with movie people acting up when doing TV. Kate’s using Glee to further her career yet she feels like she’s doing them the favor. B-tch please. You haven’t done shit since Almost Famous and you basically played yourself in that movie.

Do you think Kate Hudson’s jealous of Gwyneth? I do. There’s just something about that woman. I hate her as much as I love her and I’m sure I’m not alone. It’s the smugness. She’s so damned smug that everything she does is right. Maybe that’s why Kate’s freaking out. Kate thought that just because Glee was right for Gwyneth, it would be right for her. Silly Kate. For all of her poetic waxings and GOOPy advice, Gwyneth Paltrow is only ever looking out for Gywneth Paltrow. I know this and yet I love her. How does she do it?