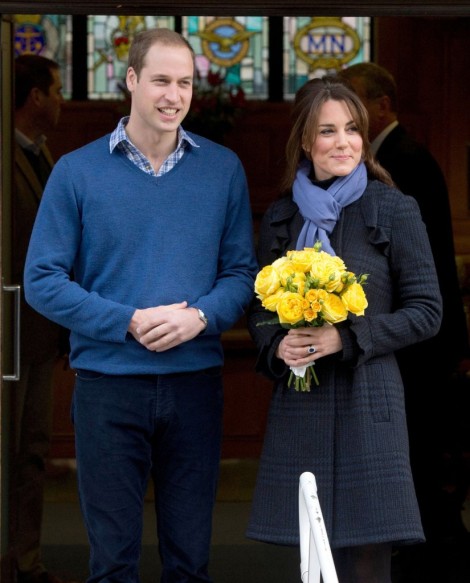 So who out there thinks Kate Middleton went into the hospital and got herself diagnosed with this puking disease because she didn’t want to go back to Anglesea? I’m must saying… it’s cold there and wet and BORING and so far away from her parents and Princess Pippa. Who wouldn’t play up a sickness to stay in the comforts of Kensington palace? Because that’s where she’s staying while Prince William goes back to work for the RAF.

According to the Daily Beast: “Kate is expected to stay in London to be near doctors because the condition that the duchess, who is believed to be only eight weeks pregnant, has been diagnosed with can last for the first five months of pregnancy and sometimes for the duration. William is obliged to return to his RAF base in Anglesey in Wales to make up his flying hours, which were severely impacted by the amount of time he had to take off work for the diamond jubilee celebrations. He is currently understood to be on compassionate leave. Senior courtiers tell the Royalist that William is committed to his current role as a search and rescue pilot until mid-2013, and there is no possibility of him seeking special treatment or early release.”

But come on William! Just quit! And I’m not just saying that so he can sit by his wife’s side because that shit would get old for me real fast if I was Kate. He should quit so he can stop waiting the RAF’s time. How much work does he actually do there? I’m sure they can find someone to replace him in a hot minute. I understand he wants to look like a normal dude who has work responsibilities but I’m not sure who he’s fooling on this one.

So is Kate Middleton abandoned? Probably not. She gets the spend the next 7 months in London hanging with Carole and Pippa – and Camilla. I’d deal with Camilla over Anglesea any day. Think of all the baby shopping Kate can do now! Oh yes, she had this little old trick planned ever since she saw those two pink lines. And I’m not hating. A girl’s got to do what a girl’s got to do to protect her fetus from overbearing boredom.

Attached – pics of Kate Middleton leaving the hospital with William this morning. Are you annoyed as I am by how cute her outfit looks?  Biotch should be in sweatpants! Love the jacket.