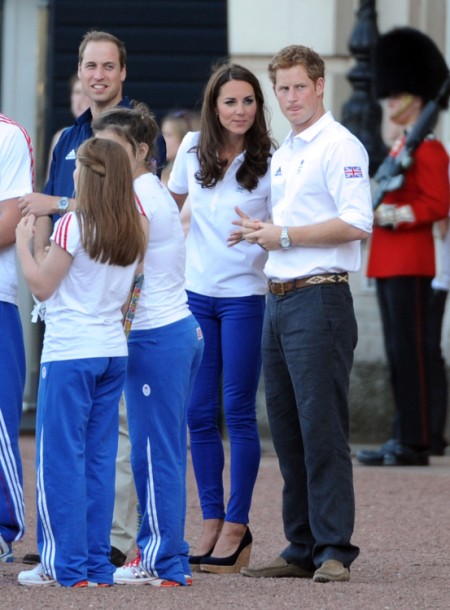 The young royals haven’t shied away from the media spotlight during the past week of Olympic events, in fact, one might say they’ve encouraged it wholeheartedly. But if you think the intensely private and, most times, evasive Prince William is turning over a new leaf think again. William, Kate Middleton and Prince Harry’s welcoming act is just that – an act – in an effort to sell the world Great Britain and bring more tourism to the economically struggling nation.

A royal aid told The Telegraph, “The Duke and Duchess and Prince Harry have been throwing themselves into the Olympics with gusto as they recognise that the Games provides a unique moment for the country to sell itself and they recognise they are in a unique position to represent the nation to our friends and partners around the world.”

Easy enough. I’ve already been sold. But the battle for tourists isn’t the only one raging. The battle for the most popular royal is in full swing and you’ll be surprised who might be pulling ahead!

Everyone wants a piece of Harry! Kate has the “Kate Effect” but perhaps we should give the prince the “Harry Hype” because his tour of Central and South American earlier this summer is still having a great impact on those areas and causing the royal family to rethink how they will use the charismatic, adorable “third wheel” in the future. The Telegraph reports:

During the Prince’s tour of Rio-de-Janeiro and São Paulo, cities where the economy is booming, Jeremy Hunt, the Secretary of State for Culture, Media, the Olympics and Sport, described Prince Harry’s effect on the international stage as “electrifying”.

“Prince Harry has the impact of 1,000 politicians,” said Mr Hunt. “He is becoming an extraordinary phenomenon. He has not been on top of our list before as an ambassador, but seeing the electrifying effect he’s had here…shows just how he has taken to the role.”

The Government is believed to be keen to employ the Prince more regularly on the international stage to boost British trade and maintain good diplomatic relations throughout the Commonwealth.

Royal aides said that the Prince will undertake further overseas tours but that his military career as an Apache helicopter pilot in the RAF remained his priority.

A royal aide said: “Prince Harry’s focus is still very much his military career, so he will be limited in what he can do while his full-time job is the army.

“But he will undertake other tours in the future on behalf of the British Government and his charities.”

He’s just got Princess Diana’s touch, right? You watch him rough house with little children and your heart melts. You listen to him lament over not having a girlfriend and you die for him even though you know he gets laid constantly. You imagine him pining for his sister-in-law and you just want to hold his head in your lap. He’s the true Madonna and the Whore.

Kate and William are obviously no slouches either but Harry completes their happy family. The Triumvirate has attended on average four events a day and they always look excited to be doing it. [An aside: Have you noticed Kate’s been wearing the same pair of navy blue skinny jeans every day? Is it just me, or do you wonder how often she washes her clothes? I’m not calling her dirty… yet. Do you think she has like four pairs?]

But the trio’s exuberance and fame is not without its downsides. The article had to point out William, Kate and Harry’s beef with surly Prince Andrew. “The increase in the Duke and Duchess and Prince Harry’s presence as international trade envoys has coincided with the Duke of York’s decision to give up his title of Special Representative for Trade and Investment, a role which saw him attract criticism following disclosures about his friendships with the Gaddafi family and Jeffrey Epstein, a convicted sex offender.”

Now, this isn’t a big remark and it was all the way at the bottom of the article but there’s something to be said for it being there to begin with. It could have just as easily been left out. I think it speaks volumes. Prince Andrew is getting pushed out and he isn’t liking it one bit. I doubt he’ll go quietly either. What’s interesting is that Andrew used to be the old Prince Harry. He was the attractive playboy prince and the world loved him for it. Hard to tell now since he’s grown fat and crotchity. One thing I read recently is that Andrew and Prince Charles used to be really close – like William and Harry close – and Charles offered Andrew a position as sort of his right hand man so they could navigate royal life together – like William and Harry have chosen to do. But Andrew turned Charles down and went his own way and, as of right now, is fading into obscurity. Do you think he regrets that? That’s precisely what William and Harry are trying to avoid. William wants to share his kingship with Harry. That’s what I like about these young royals. They are so intent on reshaping the monarchy and not making the same stupid mistakes their relatives made. Sucks for us since there will be a horrible lack of toe sucking/adultery stories but good for them!

When you scan the newspapers which name pops out to you more – Harry’s or Kate’s? Do you think Harry has what it takes to be the shining star in the royal family for years to come? Can you see Kate getting jealous of his fame?