Just Like Princess Diana: Are There Three People In Kate Middleton’s Marriage? 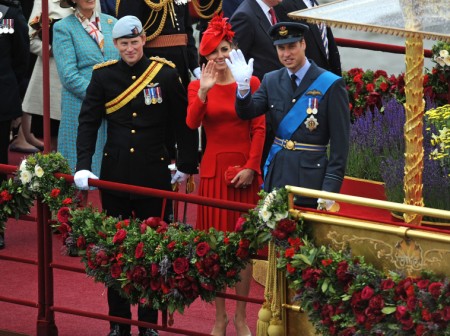 If you’re like me and royally obsessed then you’ve been loving these Olympics. Not to confuse things, I’m all about the sport as well but getting to see tons of Kate Middleton pics a day is just the icing on the cake. And where Kate goes, Princes William and Harry follow. It’s been so much fun watching the young royals let their hair down and enjoy themselves. You can see it, right? Kate looks relaxed and beyond excited and the same can be said for her princes. With the threesome playing such a focal role in the Olympics, it was only a matter of time before the media started exploring the important role they play in each other’s lives and what the Daily Mail has found out is incredibly interesting. Kate, William and Harry are striking out as a solid unit in an effort to rebrand the monarchy and play the game on their own terms away from Prince Charles and the Queen’s heavy-handed influences.

That’s not to suggest there is a rift between the princes and their father Charles — on the contrary, they enjoy a warm and mutually supportive relationship.

Indeed, Charles has agreed to fund William and Harry’s private office out of his existing income from the Duchy of Cornwall and, as I revealed earlier in the year, even offered to foot the bill for Kate’s not inconsiderable working wardrobe. The Prince has always made clear he is proud of what his family is starting to achieve. In recent months, the Duke and Duchess of Cambridge and Harry have been constructing a royal base that is very much separate from the Prince of Wales — and one that they hope will flourish for many decades to come.

As if that wasn’t evidence enough of the young royals’ determination to spread their wings together, they have also just launched their own charity — The Royal Foundation Of The Duke And Duchess Of Cambridge And Prince Harry — with a dazzling new website featuring glossy pictures of the three together….

‘William and Harry know that when they join forces it has a great effect. They honestly believe they can make a difference working as a team and want to stay together as a team for the rest of their lives. It may sound a very grand thing to state, but it is something they themselves would say,’ says a confidante.

But what about Kate and Harry’s special relationship we keep harping on? Well, it’s special but in no way inappropriate a source tells the Daily Mail. “It’s also worth noting that until Harry, said to be quietly romancing bubbly banking heiress Cressida Bonas, decides to put a ring on someone’s finger, Kate is the only girl he’ll be seen with formally in public — as etiquette dictates that any sweetheart cannot be welcomed into the royal fold until he make an ‘honest woman’ of her. What you have to remember is that he has known Kate for many years — almost as long as his brother,” the source said. “I know Prince Harry is absurdly proud of the Duchess as his sister-in-law, and is very supportive and protective of her. I am sure Prince William will be the same to Harry’s wife when the time comes.”

Prince Harry’s wife is increasingly more important now. Kate has to approve. Kate and this girl have to get along to complete the happy circle. I think it’s great the brothers want to stay close and work together throughout their lives. I actually think William likes spreading out the King work but if their wives don’t get along it won’t be so simple or easy. Is that why Chelsy Davy won’t pull the trigger? She and Kate weren’t exactly besties and they’ve had ample time to get to know each other throughout the years. But Cressida won’t last long either. Kate’s not a fan of Cressida’s older sister who was rumored to have had a thing with William when he and Kate were separated. So what’s a guy to do? Flirt with his beautiful sister-in-law! William doesn’t seem to mind, why should we!

Do you think it’s a realistic goal for Prince William and Prince Harry to think they can continue as they have even when wives and children enter the picture? Do you think Kate is standing in between Harry and Chelsy because she likes having all the attention? I always wonder about that….