BY Jeanne Adams on July 20, 2012 | Comments: one comment
Related : Prince Harry, The Royals 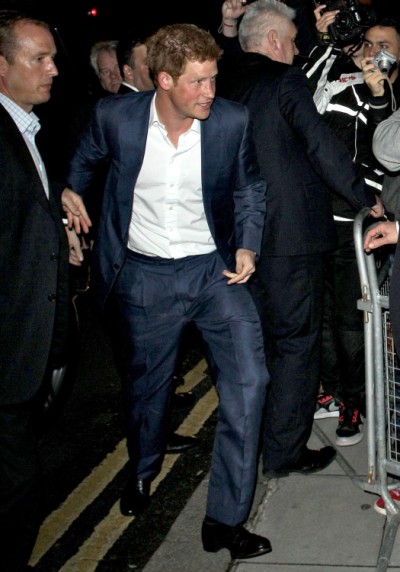 Prince Harry certainly has a type. The third in line to the thrown was spotted partying with Burberry model, Cressida Bonas, until 4 a.m. Thursday morning after Harry attended The Dark Knight Rises premier in London.

Harry and Cressida were introduced by Harry’s cousin, Princess Eugenie and the two took extra pains not to tip the press off that they were together throughout the night. Cressida was accompanied into the Freemasons’ Hall in Covent Garden by Harry’s best friend, Tom Inskip, and then she was seen leaving the final club of the night alone and minutes apart from Harry. However, despite the sneaking around, the Daily Mail reports the two were caught hooking up and “kissing in a corner”.

Cressida bears an uncanny resemblance to Harry’s long-time love, Chelsy Davy, but the similarities don’t just stop at the long, blond hair. The model and aspiring actress also attended Stowe public school and Leeds University and is considered a familiar figure in London’s upper-class social scene. She’s the daughter of Sixties cover girl Lady Mary-Gaye Georgiana Lorna Curzon, and her half sister, Isabella Calthorpe is recently engaged to Richard Branson’s son, Sam Branson. Those are pretty nice connections to have. Harry, Prince William and their cousins are super tight with the Bransons so it was only a matter of time before this particular blond made it into his circle.

Prince Harry has made it known he’s ready to settle down with a partner like his brother but he’s had a rough time finding the right girl who actually wants the job. He was said to be smitten with English actress, Gabriella Wilde, but she was nervous to date Harry because of all the harsh attention royal girlfriends receive, citing Kate Middleton’s paparazzi-filled life as an example. I doubt Cressida will have the same trepidation. She’s not just some entertainer. She comes from Harry’s world. She’s only too willing.

I can’t bring myself to care about this girl. Harry can use her and have fun all he likes. We all know he’s just playing around until Chelsy takes him back. She has to! We need her in that palace. Someone needs to keep Kate on her toes and Chelsy’s the only one with the balls to do it. I know you want me to get over her. “They’re done!” you say. Ya, well, we all thought Prince Charles was over Camilla too and look how that turned out.