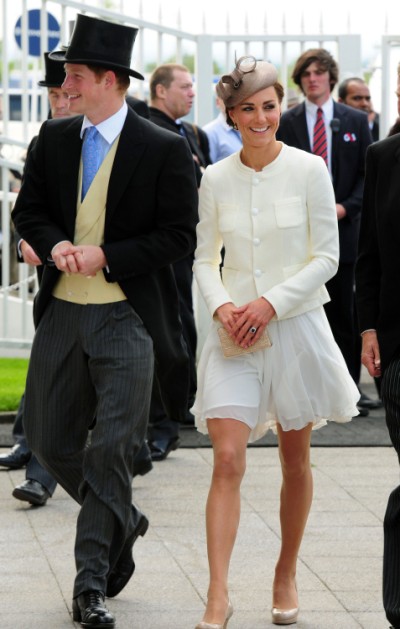 Kate Middleton may be the picture of royal poise and refinement but her seemingly model behavior is making it difficult for Prince Harry to snag a princess of his own.

Prince Harry is said to be head over heels for English actress, Gabriella Wilde, but she’s hesitant to start a relationship with the ginger Casanova because of Kate. “Harry is a huge fan of Gabriella — and she likes Harry a lot. But she is very wary of becoming another Kate Middleton,” a source told the UK’s Sun. “She is put off by the huge glare of the spotlight that surrounds everything Kate does.”

This isn’t the first time Kate has chased away one of Harry’s girls. Kate and Harry’s special relationship is said to be one of the main reasons why Harry’s on again, off again squeeze, Chelsy Davy, won’t make an honest man out of him. She was frightened by Kate’s perfect persona and didn’t want to be constantly compared to the people’s new princess. You got to feel a little for Harry don’t you? He sounded like a sad puppy dog when he told Katie Couric he wanted to settle down but no one wanted to take on the job. He was spot on. It is a job, isn’t it? Kate has definitely made it one. She successfully shifted all of her time waiting on Prince William and being at his beck and call to becoming the Duchess of Cambridge. And people love her for it as evidenced by the uproar over her rotten teeth!

But Kate’s not at fault here. She’s doing what she has to do and dealing with her own set of royal baby bump pressures. This totally reminds me of one of my favorite quotes in Romy and Michele’s High School Reunion. Janeane Garofalo, a.k.a. Heather Mooney says, “Wow, all that time you guys were making my life hell, the A group was doing the same thing to you! I had no idea!” She was brilliant in that movie!

Anyway, the more I hear about Harry’s ladies not wanting to fill the vacant role, the more I think I learn about Kate. Because Kate wanted it bad. She craved it for close to a decade and she made it happen. What does Kate have that these girls don’t? Ambition? Self control? I think it’s what Kate doesn’t have that sets her apart. Chelsy already has the money. Gabriella already has the fame. Kate was willing to take on the headaches for both. So is Harry fishing in the wrong pools? Perhaps he needs to start checking out the middle classes like his big brother to find a princess that’s willing to give up everything she once knew so she can have everything she ever dreamed of.