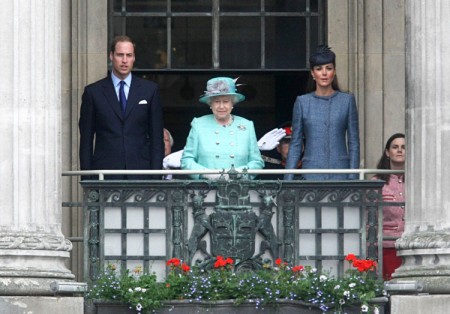 Queen Elizabeth II has finally decided to accept and openly endorse her son, Prince Charles and his wife, Camilla Parker-Bowles, as the future monarchs leaving Kate Middleton and Prince William disgusted and betrayed. The idea that the Queen would ask Charles to abdicate in favor of his oldest son is one that Princess Diana and many of the nation favored, but it turns out the Queen never planned to make William king, the Globe reports.

Recent polls have come out citing the people’s grudging acceptance of Charles as their future king, but there are still many who believe William and his young exciting wife would do a better job ruling the country in to a more modern age. Charles has been Prince of Wales longer than any other royal in history, and a lot are worried he will bring more of the same when he finally sits at the head of the table.

What Kate and William have done for the monarchy in the last couple years is nothing short of extraordinary. It hasn’t been this exciting to watch since Princess Diana was parading her bikinis all over the Mediterranean and Sarah Ferguson was getting her toes sucked. A lot of people thought the Queen owed it to them to pass over the crown. One might even argue the Queen’s recent Jubilee celebration wouldn’t have been as hyped if Kate and Wills weren’t there to shoulder the attention. That’s not to say the Queen doesn’t have her admirers, but we all know Kate’s picture is on every magazine cover because she’s the current sell.

And the Globe also says Prince William’s recent late night drunk fests have to do with his disappointment over the crippling decision. I always thought he wanted his dad to be king so he could have more normal life playing with his helicopters and playing polo with Prince Harry, but there must have been a little part of him that tasted the idea and got a little excited. You can’t really blame him.

Do you think the Queen was right in telling Kate and William to wait their turn or is she misjudging the country’s need for the popular couple?