Kate Middleton And Prince William Confirm Babies On The Way! 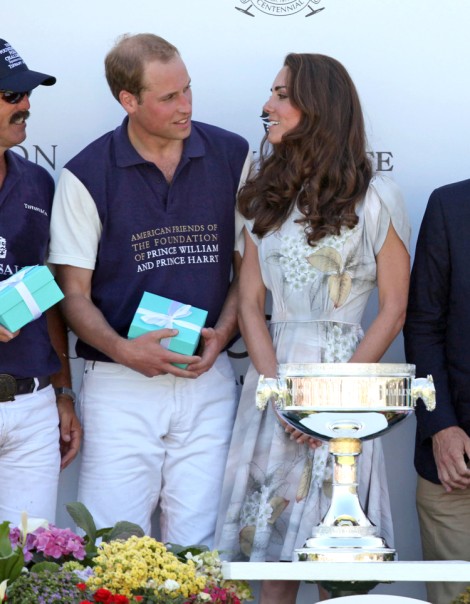 Believe it or not I woke today not looking for a Kate Middleton story. I told myself to take a break. The Asian tour is long (sort of) and I’d have my share of chances to write about this mind-bogglingly boring yet glamorous couple. But then I got on my computer and BANG! Prince William and Kate Middleton want two kids! How could I not write about that I ask you? It’s too much goodness! Prince William talking babies less than 24 hours after his wife abstained from wine at a state banquet. Something’s going on I tell ya. Something’s going on!

Let’s set the scene. It’s not like William got up to the mic at the Rolls Royce plant today and said “Buy British! Oh, and Kate and I want two kids!” No, it was a little more subdued than that. The royal couple were looking at more flowers today (seriously people?) and someone from the crowd asked the prince directly how many children he would like to have and William gamely responded, “Thinking about having two.”

Now this is what I like in a crowd! Not only was it hot as hell and people were literally fainting to see Kate and Wills, but they had the balls to ask good questions! You got one shot people, you need to make it count! And this lovely spectator did and I salute him!

And to keep the baby tour express moving along, The Telegraph reported Kate was also given a children’s book called Blow A Kiss by the mother of its author David Seow. She adorably said, “My son gave a copy to Celine Dion and she had a baby!”

So all of this means nothing, right? Kate drank water (I still think because she knows she can’t handle her alcohol), William answered a question about babies, and Kate accepted a children’s book. None of this actually means she’s pregnant! We can be completely silly and also add her clothes have been relatively flowy but tight at the high waist and loose around the abdomen. I can’t believe I just pointed that out! Because I’m still calling a bluff on the pregnancy. It’s not time yet. I think Kate and William are great performers and giving the people what they want – nothing more, nothing less. I’m sure they got a memo from the Queen before they shipped off saying, “Prince Harry embarrassed us again. Lay the baby story on thick!”

I’m just being selfish though. I still want them to conceive on this tour and pull a Posh and Becks and name their kid after the place. Queen Tuvalu has such a better ring than Queen Diana! OK, hope this satisfied your Kate Middleton baby fix today. Hopefully I can restrain myself later but I’m not promising anything!