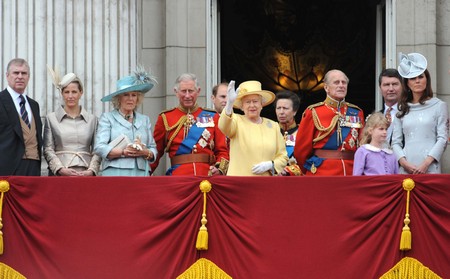 Prince William with Kate Middleton by his side are slated to take over the British Monarchy after Queen Elizabeth II but Prince Charles and Camilla Parker-Bowles are determined to take their place. This revelation is reported by GLOBE and it looks like Will and Kate will be in a battle to see that they are not replaced by greedy Charles and treacherous Camilla.

According to GLOBE, ‘Elizabeth has already decided to bypass Charles and make William the next king because she is afraid that the monarchy might die without an infusion of fresh blood and the energy of youth.’ Not to mention that Charles and Camilla brought a heaping dose of shame and scandal to the royal family with their illicit relationship – carried on while Charles was still married to Prince William’s mom, the late Princess Diana.  When Charles divorced Diana Britain and the rest of the world went into shock.  Queen Elizabeth II practically disowned Prince Charles for the damage he did to the royal reputation.

Now the pair of usurpers, Camilla and Charles, are trying to steal their way back onto the throne at Will and Kate’s expense.  “During the pageant, Charles made a point of arranging private audiences with his mother,” says a source. “He told her William is too young and should be given a chance to raise a family with Kate before being plunged into the role of King. What a cruel stab in the back for William!”

GLOBE Print Edition, June 25 reports: As the royal clan gathered to salute the monarch, Prince Charles and scheming Camilla launched a desperate bid to get back into the Queen’s good graces-and steal the throne away from her designated successors, William and Kate.

But angry Camilla, the Duchess of Cornwall, has never totally given up her dream of becoming queen-and now that she’s roped her husband into her campaign to make a Elizabeth change her mind and restore Charles’ right to succession, say sources.

The Jubilee celebrations provided the scheming couple of the ideal opportunity to poison the well for William, say insiders.

Television showed Charles turning on the charm and cozying up to the woman he still calls “Mommy” at every opportunity.

“At one point, the fawning Prince was seen kissing his mother’s hand – bringing a big, delighted grin to her face, “says a source.

“And not far away, Camilla was spotted ever-ready with a friendly smile and a steady hand for her tiny, aged mother-in-law.”

Meanwhile, Charles cunning spouse kissed up to her Majesty every chance she got, say sources.

On the royal barge she doted on Elizabeth “like a clucking old mother hen,” according to another guest.

“And when Prince Philip was taken ill, Camilla offered to sit at the Queens side in the horse-drawn coach returning from the Jubilee service at St. Paul’s Cathedral.

“The battle for the crown is on! Charles planted the seed of doubt in the Queen’s mind-now who knows what she will do.”

Let’s hope that Queen Elizabeth never wavers in her intention to bestow the crown upon deserving Prince William and charming Kate.  The last thing anyone needs is scandal-plagued Prince Charles and his mentally deranged wife, Camilla Parker-Bowles, ruining the future for Britain’s monarchy.