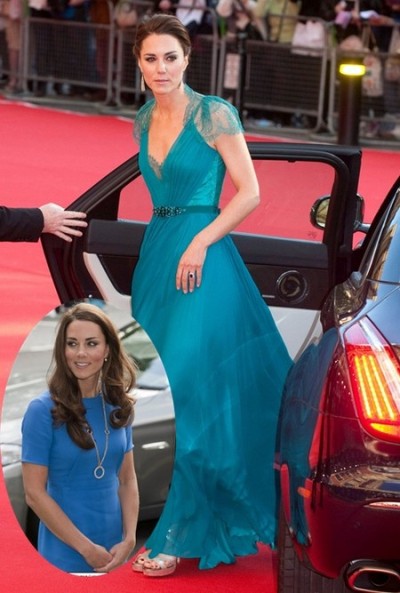 Another day, another Kate Middleton pregnancy rumor to contend with but even I have to agree the Duchess of Cambridge looked fuller and healthier while visiting the National Portrait Gallery in London today to view an Olympics-themed exhibition entitled, Road to 2012: Aiming High.

In a blue Stella McCartney dress and Prada shoes, Kate kept her hands politely folded in front of her tummy leading some to believe she’s trying to hide something. Even Tom Sykes from The Daily Beast got in on the guessing game! He wrote, “I’m going to state this as plainly as I can and I hope I don’t offend anyone because that is never the Royalist’s intention; I think Kate’s boobs are looking bigger. It might just be the cut of the £500 Stella McCartney dress (it ’embodies easy luxury with it’s minimalist silhouette’ according to the Selfridges website) but I do believe I also detect a pregnancy-like proto bump on her admittedly rather slender body, poring through the pictures of today’s outing.”

Now, I have to play devil’s advocate. Kate always has her hands in that position. I think it’s the proper way to stand without your arms hanging listlessly at your side. And she could just be wearing a padded bra. But my main argument against the bun in the oven argument is that the dress fits her terribly. I like Stella McCartney but sometimes her dresses make no sense to me. The color is cute. The style is even cute – though a tad boring. But it just doesn’t fit. It puckers around her middle giving the allusion of a bump. Stella is all about those optical allusion dresses right now so why would Kate choose one that makes her look rounder? Does she want people to lay off the weight issues that the honeymoon pics brought up? Or does she want people to think she’s pregnant? Maybe it’s as simple as she just liked the dress. I just don’t get it. But if you’re tired of pregnancy rumors, just wait. Kate’s an ambassador for the London games and sure to be at a whole host of events. We’ll be getting plenty of Kate Middleton pregnant stories over the next two weeks. Let’s judge them all together!

But take a look on Sykes’ page of Kate shaking the woman’s hand. Definitely rounded there, right? Maybe I’m wrong. Will and Kate’s sex life may not be rocking but it does only take one time!