Kate Middleton Blooms Into A Fashion Goddess At Olympic Event 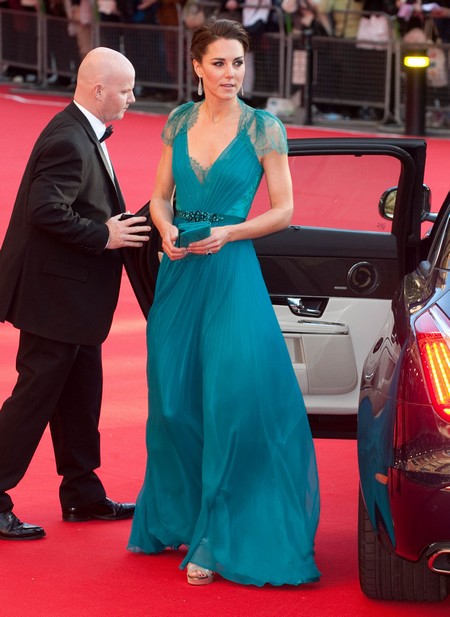 Kate Middleton put her hair up and got down to business stunning the crowds yesterday at a gala to mark the countdown to the London Olympic Games.

Kate and her husband, Prince William, arrived at Our Greatest Team Rises, to raise critical funds to support the competitors. She looked utterly divine in a flowy, teal Jenny Packham gown with delicate lace covering her bare back.   And Kate’s hair was absolutely amazing!!

Some of the 67 athletes already selected to compete in the Games were also present though naturally Kate took center stage. Gone were her long, fat curls, and in their place was a tight, intricate chignon highlighting her swan-like neck. This could be an indication that Kate has heard the recent rumblings that her hair was getting too long and her constant tick of fingering it during Royal events was a tad unprofessional. This wouldn’t be the first time Kate’s taken notice of critics. Just last week she was chided by shoe designer, Nicholas Kirkwood, for not princessing up her wardrobe, and she turned up Tuesday in a pair of snazzy Jimmy Choo heels sans pantyhose. She recycled the shoes for the gala.

It’s understandable Kate wanted to turn it out for the event. The upcoming Olympics are important for the young couple who, along with Prince Harry, are Official Team GB and Paralympics GB 2012 Ambassadors.

William spoke of their excitement for the summer to a low-key reception of 3,000 guests.

“These Games remind us of the power of the human spirit and human endeavor. You, our Olympians and Paralympians, will inspire people up and down this country, and far beyond its borders. For the athletes of Our Greatest Team, these Games mark the pinnacle of your sporting careers. I can only imagine it… competing at home, in front of your countrymen and women, with the eyes of the entire world upon you.  A dream come true.?”

But the Olympics aren’t the only pressing events on the new Princess’s calendar. The next few weeks will be full for Kate as Queen Elizabeth’s Diamond Jubilee celebration approaches. She already made a few Royal stops with the Queen, who appears to have taken her under her wing, but a very important and iconic date is coming up. It’s been confirmed Kate will join the Monarch at the annual garden party at Buckingham Palace. The Daily Mail reports she will take tea with the Queen and 8,000 guests in the gardens of the royal residence. Sadly, she will have to carry out the mission alone since William cannot get off work that day. I can’t see him being too bummed about that. The exact date cannot be revealed because of security reasons.

But the garden party is a big deal for the princess who continues to barrel through her lists of “firsts” with the Firm with her signature grace and style.

A royal source told the Daily Mail, “The Duchess will be attending her first garden party at Buckingham Palace. It is something of a rite of passage and she is looking forward to it immensely.”

I am too! But with the Olympics, the Diamond Jubilee and then another Royal Tour to the South Pacific soon after, I don’t think a baby is in the cards yet. Do you think they’ll spring the news on us any day or will we just have to wait until their current Royal duties die down?