Kate Middleton Fears Being A Single Mother – Pregnant and Alone 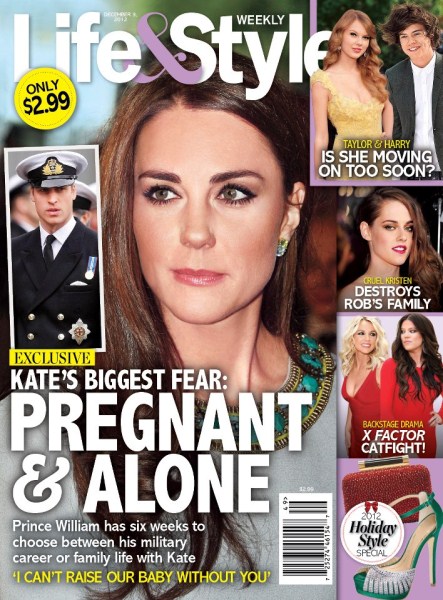 As most of my friends and family are busily readying themselves for Thanksgiving, I am just biding my time until Prince William and Duchess Kate Middleton’s reported big announcement next month. At least I have the latest cover of Life&Style to comfort me!

The biggest story on the cover is – obviously – the Royal couple. Pregnancy rumors have been swirling around for ages, but it seems they could finally be true. With the Prince making moves to leave the RAF to take up more royal duties, and Kate-Watchers speculating on a possible weight gain, my Christmas wish may come early this year! According to Life&Style, William has 6 weeks to choose between the military or his family- and Kate’s worried that this decision might mean an absent baby-daddy. I sure hope not, do the right thing Wills!

The next story is about the puppy love extravaganza between Taylor Swift and Harry Styles. The caption reads: Taylor and Harry- Is She Moving on too Soon? While Harry is cute in that “you know I’m a rebel because of my unkempt hair” kind of way, I just don’t get the appeal of Taylor. Plus, her perma-squint bugs the shit out of me! Damn, get some corrective lenses Tay Tay! So I say- get it while you can girl. Cue Taylor’s totally genuine surprised face.

And everyone’s favorite little homewrecker is on the cover as well. Kristen Stewart’s reign of terror and heartbreak has spread beyond Robert Pattinson, Kristen’s immediate circle and their wives according to Kristen’s caption. It reads: Cruel Kristen Destroys Rob’s Family. I do not doubt it for a sec. Bitch wants what she wants and will walk over anyone to get it. Oh, what a happy holiday season the Pattinson-Stewart circus has ahead of them!

And then there is some blah-blah about backstage drama at The X-Factor between Britney Spears and Khloe Kardashian. I think. Their names are not on the cover, and the issue is not in smell-o-vision, so I’m not positive. Ugh, Britney and Khloe in a power struggle. Bored-moving on…

Last but not least there is a 2012 Holiday Style Special in this issue. A cute clutch and heel are featured on the cover, but if the other side of that purse is not embroidered with the gleaming faces of Will and Kate, there will be hell to pay.