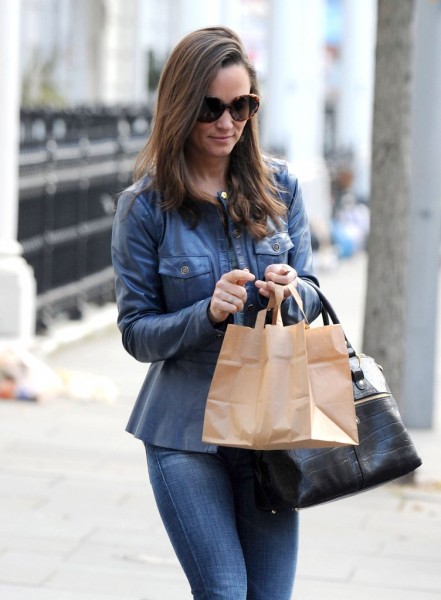 If Kate Middleton and Pippa Middleton fight half as much as the tabloids say they do than I feel sorry for Prince William. It’s no secret Kate doesn’t have many close friends so you’ve got to imagine he has to sit through the brunt of this nonsense. William! Pippa’s at it again. First she just had to write that horrid book which failed thanks to me but now she’s dating a reality star. Why does she keep ruining my life?!

To be fair to Pippa, her new boyfriend, James Matthews, isn’t a reality star – her boyfriend’s brother is and the book only tanked because the royal family refused to let her promote it. But Kate’s not listening to any of that. Reality star once removed is not good enough for the future Queen’s sister and Kate has been so disappointed in Pippa that she failed to throw her a party for the book. Now that’s just bad manners!

I actually don’t mind James Matthews for Pippa. He’s a banker and former Eton kid so he’s from the right circles. For some reason, aristocratic mothers are keeping their sons away from Pippa so this might be the best she can do. Since when is being related to a famewhore a problem for Kate? Her uncle and parents are constantly using her name to make money. Why is it OK for Kate and Pippa to have a black sheep family member and not poor James?

If I were Pippa, I’d point the finger at Zara Phillips every time someone scolded me. Why is OK for Zara to marry a philandering rugby player? Why is it OK for Zara to film Land Rover commercials and hawk Rolex watches? She also tried to sell her wedding photos to the tabloids and pitched a fit when Grandma said no. She complied but her brother Peter Phillips sold his pictures anyway. True, Zara and Peter don’t have royal titles but neither does Pippa. Why can they presumably sell out when she can’t? You have to point the finger at Kate and maybe even Carol Middleton. There’s so much pressure for the Middletons to shine and be perfect. It’s almost like they are holding themselves to crazy standards. Zara Phillips can do whatever the hell she wants. She’s Zara Phillips. People love her and she doesn’t have to pretend she’s royal. She is without trying. Pippa and Kate are still trying to prove they belong in the club and that sucks for Pippa.

I don’t believe this story for the most part. I have a hard time believing Pippa would entertain the idea of dating a guy who she knew would be off limits. On the other hand, I still think she’s dealing with a lot of shit right now. Her book TANKED horribly. She’s quite the laughingstock in upper class circles. Those aren’t prime conditions for keeping your cool. I’d go easy on her right now if I were Kate. Pippa could be breaking down. She could go rogue. Kate should let her have this boyfriend to calm her down and set her straight. Without the calming influence of new love interst, there’s no telling what Pippa might do or say!

Is Kate Middleton fighting with Pippa again or are the tabs just looking to drum up some controversy involving Pippa Middleton’s new boyfriend?