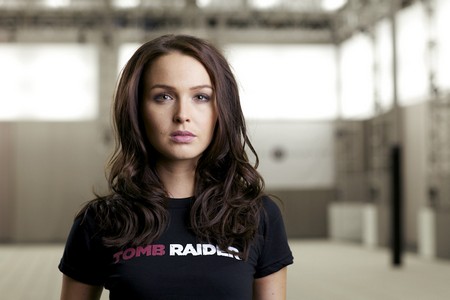 Lara Croft is one of the most famous video game characters in recent years – even Angelina Jolie portrayed her for a few stupid film versions. Square Enix, the videogame masterminds behind the Final Fantasy franchise, decided to have one super royal Lara Croft, by the name of Kate Middleton.

Well, sort of… To the fact checking aficionados who regularly berate us for our “fact checking” and who call us out on each and every article, referring to us as “dumb bitches”, this article is just for you! Read and enjoy. The latest actress to portray Lara Croft in the video gaming series is Camilla Luddington. Let’s play a game of connect the dots!

According to Camilla’s Wikipedia page, she portrayed Catherine Middleton in the television film, William and Kate. Therefore, Camilla is not really Kate Middleton, so you caught us! Yes, you did, you fact checking freak!

Camilla was in Californication and can now also be seen in True Blood’s 5th season as the character Claudette.  Camilla is the first actress to play the heroine physically, with all the mumbo jumbo motion capture stuff(s) involved.

Square Enix is taking Lara Croft to a whole different level of sex appeal and coolness, after it was revealed that this Lara Croft will be taken in a whole new direction.  The game has come under fire for the portrayal of Lara Croft as a young woman. One particular scene, where Lara is the victim of attempted sexual assault, turned her into less of a feminist icon than what gamers are used to, and more into a helpless ingénue.

What do you think readers? Do you like Lara Croft? Have you played it before? Let us know in the comments below.