Kate Middleton On Children, Princess Diana And, Of Course, Shopping 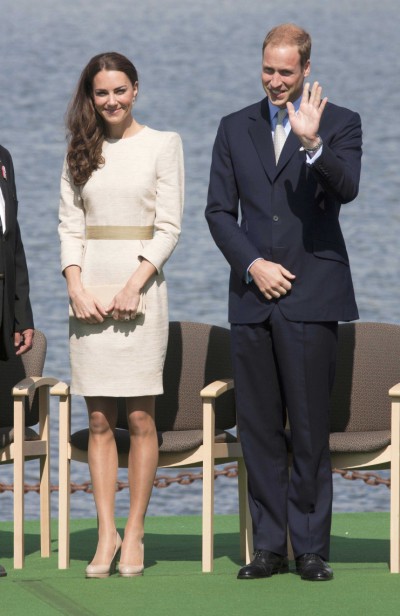 Have you heard? Kate Middleton’s in Singapore! Her 9-day royal tour of the South Pacific began today after a 14-hour plan ride. Oh, right, Prince William is there too but no one seems to care about that. It’s all Kate, Kate and more Kate. And she isn’t disapointing! We’ve already had one wardrobe/hair style change and she’s practically incited riots with her talk of children, Princess Diana and shopping! Does it matter if the riots are in my head?

Let’s go over what we know so far. Kate arrived wearing a Asian-inspired Jenny Packham dress and shook hands, received boatloads of flowers and talked children. Apparently she asked one of the woman who gave her flowers about her babies. It’s obligatory and nice chit chat but it also fulfills the “Kate Middleton loves kids!” message the palace loves to spin.

After that the couple traveled to the Botanic Gardens, where William was shown the orchid named after her mother. She died before she could get over to Singapore to see it but apparently she was excited about the honor. Kate and William also had flowers dedicated to them on the trip. They spent the rest of the time trying to look as interested as possible at orchids. I could have handled that for ten minutes but then I would have been tugging on someone’s coat sleeve saying, “I gots to go.” But Kate never tires. Kate’s interested in everything!

But Kate couldn’t help herself. She was forced to talk so she talked about what she knows best… shopping! Kate Middleton the bargain shopper strikes again! She chatted it up about how much she loves outlet center, Bicester, in London. I doubt she needed coaching on that answer! Kate does love to shop and the palace loves it when she uses the word bargain.

And I just have to do it. I can’t help myself. I’m actually not trying to start a riot but… Kate’s face… a little puffier? Is she putting on weight? I’m sensing baby or at least she’s trying to ready herself for baby-making which could mean she’s allowing herself solids. She was just on vacation with William in France. Maybe it’s just some wine bloat. It happens. She looks great regardless although she was a tad subdued after she got off the plane. I thought something was wrong at first when I shuffled through the pics but I realized she just hadn’t put her smile on yet. I tend to think Kate is sulking when she isn’t smiling like a maniacal clown from hell. Her facial expressions are extreme that way, she’s either working on pensive or blissfully happy. I’m tired just watching her!