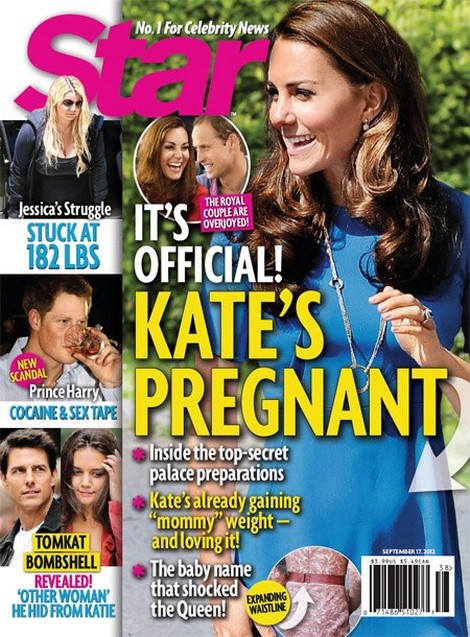 It could finally be true! Kate Middleton and Prince William are reportedly expecting, claims the latest Star magazine cover. The tabloid  insists that Kate is pregnant with her first child which she hopes is a girl because, naturally, she wants to name it Diana.

It had me until the Diana part. The Queen would never let that go down on her watch!

“Friends say Kate is convinced it’s happened, and while she and William are keeping the news close to the vest, they’re delirious with joy,” an insider confirms to the mag. “A woman can always tell when the earliest signs appear, and it’s believe that a passionate night together at their rented country house on an estate in Wales, just after the end of the London Olympics, did the trick.”

First of all, a woman doesn’t always know, hence pregnancy tests. And a “passionate” night? They’ve been together for 10 years. Come the f-ck on Star! We’ll have to wait it out to be sure. An announcement could be held back for a few months. “It would be formally through the palace press office, but only after the royal gynecologist is absolutely convinced that Kate is in peak condition.”

So, I have to ask, do you believe this? It could be true but the idea that Star out-scooped everyone is difficult to swallow. Basically I think all the tabloids are taking turns using this headline and story. One week, one of them has got to be right! An announcement shouldn’t be that far off anyway especially since rumors insist the couple want to be pregnant by the end of the year.

This report is kind of boring. Kate’s been pregnant so many times she should have more kids than Angelina Jolie. What’s super interesting is that there’s a royal gynecologist. Does he make the rounds with all the royal women? Is he super old? Do you think he boasts to his country club friends that he’s seen all the royal vadge? Gynecologists are kind of a personal thing for women. I wonder if Kate had a say in keeping her old doc or if she had to make the switch. Yes, this is where my mind goes when I find out Kate Middleton is pregnant for the seventieth time in two months.

What do you think of Star’s report? Is it just trying to sell some magazines or is Kate Middleton’s baby on the way?