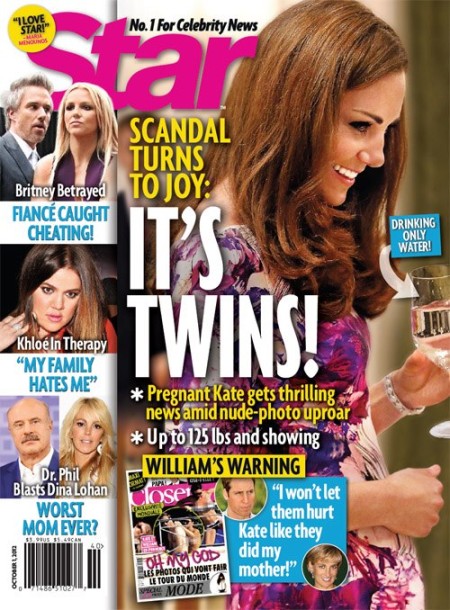 And we’re back to watching for that baby bump! Kate Middleton is in the family way with twins, and with the week she’s just had, couldn’t be happier. Star magazine reported just last week that the Duchess is pregnant and was hoping for a girl and now it’s truly upped the ante in the royal baby department.

Of course Star is basing all its claims on the fact that Kate toasted with water while at a state banquet in Singapore. Can’t really hate on Star for that, everyone was thinking the same thing. But the magazine is also backing itself up with Kate’s weight. It says Kate Middleton’s weight has ballooned up to 125 pounds. My ass. Did you see her in that bikini? What am I saying, of course you did. She ain’t no 125. But it’s cute Star thinks so.

I cannot even pretend to believe this one. I’m sticking to my story that Kate’s not in the family way yet. There was all this nonsense that came out yesterday that Prince William won’t be rushed into having children and that he and Kate always knew that 2012 would be too busy to even think about it. That doesn’t mean they’re not preparing for it – hence the water. But didn’t Kate get caught drinking a pina colada or something in Tuvalu while on their “second honeymoon”?  The resort owner said William liked it so much he had two where Kate just had one. See? Pina Coladas do not equal babies. Also, it came to my attention that sun screen is not encouraged for pregnant women. It has sh-t in it that’s bad for new mommies (and yes, that’s a technical term). Well, Wills was slathering that all over Kate’s ass in Provence so I’m pretty sure there is nothing incubating as yet. Sorry, Star! I love the stories but I’m just not on the baby train yet!

What about you? Do you believe Kate could be pregnant and just not telling anyone yet? Are you happy the “scandal” is over so we can go back to watching her belly instead of her boobs?