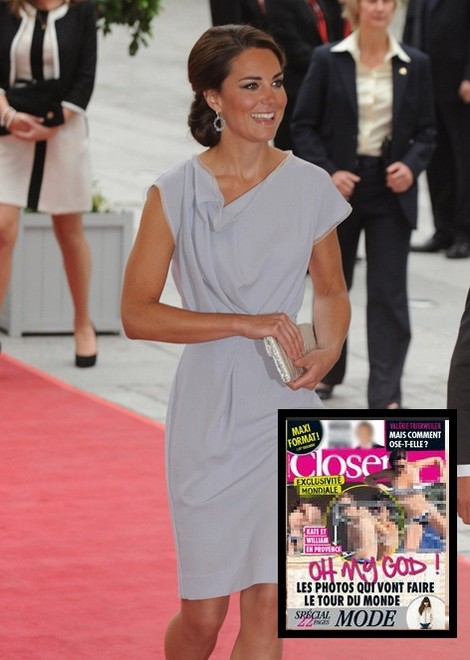 On the bright side, no one is going to be looking at Kate Middleton’s baby bump. Reportedly, Closer magazine will publish pictures of Kate topless tomorrow morning. Ooooohhhh, Prince William is going to be p-ssed!

It turns out the pics were snapped while Kate and William were on their latest vacation at Chateau D’Autet in Provence. It’s owned by a nephew of the Queen and the royal couple took a timeout there before embarking on their Pacific tour. Kate and William obviously had no idea they were being spied on and were papped sunbathing on the balcony and swimming in the pool. Harmless enough, right? The only problem was Kate wasn’t wearing her top!

Oh, Prince Harry! I thought I’d miss you! Closer’s headline reads: “The Duchess of Cambridge topless on the terrace!” I love good alliteration! According to The Mirror, Closer editor Laurence Pieau bragged, “We have to say that after Closer magazine comes out, Harry is going to feel a lot less alone.”

Poor Kate! She was just catching her stride in this whole royal thing! Do you remember how upset she and Wills were when their honeymoon pics were plastered all over that Australian magazine? And she can’t hide away in Balmoral like Harry! She’s got 6 more days of royal engagements to sit through! She’s going to feel so self-conscious. She was a giant in Singapore. Every person she talked to only came up to her chest. Now for the rest of the time she’s going to be wondering why everyone’s staring straight ahead!

Kate Middleton’s boobs are actually in good company though. Princess Diana was also papped topless, Jackie Kennedy Onassis too. It didn’t hurt them. Diana actually likened the experience to rape which is unfortunate. But seriously! Come on Cambridges! In today’s world you can’t go around sunbathing with your nips hanging out – especially when you’re one half of the most famous couple in the world!

Well, be calm and carry on, right? There’s nothing she can do about it. I’m sure she’ll be embarrassed but if she has nice t-ts then she can still hold her head high. Hopefully the pics put the damned baby rumors to rest. Was it an orchestrated photo shoot!?

How shocked are you by the news? Sure we all feel sorry for her, but how silly are the Cambridges for thinking they had that kind of privacy – especially with what they just went through with the honeymoon leak?