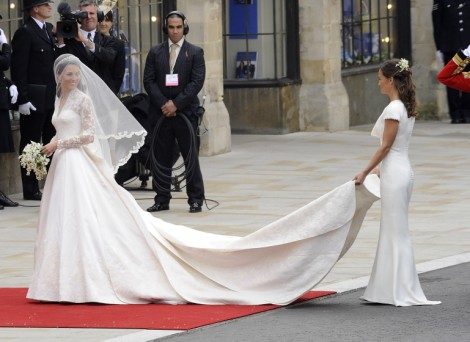 Babies truly are magic. Because instead of continuing her grudge against her big sister for flashing her royal assets all over the place which led to an embargo on her book promotions which led to dismal sales which led to her being a laughingstock in the literary/party-planning world, Pippa Middleton’s willing to put the past behind her and focus on Kate Middleton’s health and being the best aunt/godparent she can possibly be. You’re a better woman than me Pippa. Is Pippa Jan Brady? “Well, all day long at school I hear how great Kate is at this or how wonderful Kate did that! Kate, Kate, Kate!”

“Up until a few weeks ago Kate and Pippa were distant and Pippa really missed their closeness,” a source told Now magazine. “But the baby’s put it all into perspective and she’s told Kate: ‘I’m here every step of the way’. All the tension’s just fizzled away. Pippa’s looking forward to being an auntie.”

Blurg. That’s as boring as the outfit Pippa wore out last night (see below). In other Pippa news, she’s also trying to heal a rift with her critics. She wrote a guest editor column for the Spectator and addressed all those who thought her book was a tad on the basic side (which means she pretty much addressed everyone).

She wrote: “I have been much teased for my book. Lots of journalists are saying that my advice is glaringly obvious. A spoof Twitter account called @pippatips offers such pearls as ‘Enjoy a glass of water by getting a clean glass and pouring in water from a tap or bottle.’ But in my defense, let me say this: Celebrate is meant to be a guide to party planning and, as such, it has to cover the basics. If I were to write a cookery book, for instance, I would be compelled to say that, to make an omelette, you have to break at least one egg. Actually, that’s not a bad idea. Or maybe I should write a sequel and call it Bottoms Up? Now that could be a bestseller.”

Yes, that’s actually a brilliant idea. Have a sense of humor! It helps!

But do you think the Pippa Middleton Spectator column sounds like a petulant child complaining because people refuse to see things her way or is she finally in on the joke? I’m not sure. I appreciate the fact that she’s defending herself (no one else is going to do it) but it does sound a little whiny. If I were her I wouldn’t point the finger at the critics. They were only doing their jobs. I would point the finger at my older sister for ruining the whole thing (but I’m a catty biotch who likes to hold grudges. Maybe Pippa isn’t). Oh but wait! Pippa can’ t stay mad after Kate Middleton’s baby scare. Queen V saved the sister’s relationship and will save the monarchy! Queen V is going to ruin everything I love about the royal family! Wait, that’s not true. Prince Harry’s coming back soon!