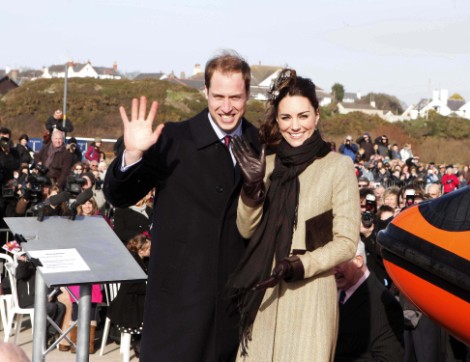 Way to go Kate Middleton! This is what I’m talking about. When life gives you lemons you go on and make your lemonade! In all honesty, Kate was showing the world her lemons but we don’t have to get technical with our analogies.

So Kate’s stopped crying long enough to look at the snaps taken of her naked self while on vacation with Prince William in Provence and is realizing that she actually looked pretty damn good in those pictures. According to Showbizspy:

“Kate has always been insecure about her body,” a source said. “While she wasn’t amused that the world’s media published photos of her topless and naked, she has been given something of a boost from the whole scandal. Kate has seen some of the positive comments about her body on the internet. It’s made her feel much more positive. But she’ll be more careful in the future.”

I don’t believe for one second that Kate Middleton is self-conscious about her body. Hells to the no! This is the girl who walked the runway in barely there lingerie when she knew a prince would be watching her freshman year in college. B-tch knows she’s hot. AND we all know Kate scours the newspapers everyday reading up on her public image. Do you think she simply misses all those stories about how skinny she is? And you think she’s self-conscious about that? Hells to the no! She’s like Miley Cyrus. She balks when you call her anorexic but secretly loves it. I don’t care if she’s sweet and gracious and a princess. You don’t keep your weight that low if you don’t have some issues. I’m not saying she has an eating disorder. I’m just saying she likes toeing the line.

And if the backlash from the photos was an aesthetic one she’d probably be singing a different tune. If people were calling her pancake t-ts or something equally hilarious she’d probably b-tch and moan a little more to Wills about prosecuting that damned photographer. But there’s been a wide consensus that her ass is pretty spectacular so she’s sitting back, letting William take the reigns while she probably smiles to herself over her tea. I would, no joke!

But maybe she’s just looking on the bright side of life. She’s English after all, though I guess that doesn’t necessarily make her a Monty Python fan. What do you think of this story? Do you think Kate Middleton’s bottomless photos have helped her self esteem? Or is Kate secretly tickled pink she’s finally the hot Middleton sister instead of just the lucky one? Suck it Pippa!