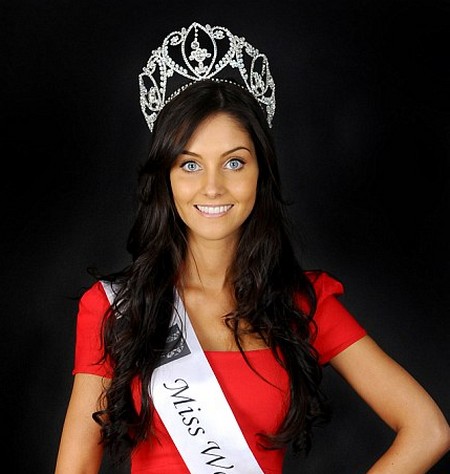 Kate Middleton seems to have been adopted as the world’s model women as her near double, Sophie Moulds, is considered the favorite to capture the Miss World title.  Sophie is very similar in appearance to Kate even down to her height – 5’ 10” – and attained the same A-level school grades.  Sophie says she is “delighted” at the comparison with Kate saying that ‘it is a great honor.’

We all know that Duchess Kate is now more popular than any ‘A’ list Hollywood star and it seems Prince William’s wife is set to conquer the whole world.  None of this comes as surprise to us since Kate is the best thing to happen to British royalty in centuries!

Miss Wales organiser Paula Abbandanato said: ‘Sophie is an exceptionally beautiful girl who is being tipped to do well in Miss World.’  Sophie, 19, has already been crowned Miss Wales where she was described having a strong similarity to Kate.  Paula added: ‘I am sure Kate Middleton will be equally delighted to know she has been compared to Sophie.’

As The Daily Mail reports:  Sophie said: ‘It’s a great honour – I was a bit shocked when people started saying I look like Kate.’  ‘But I’m a huge fan of her – she is such a natural beauty and very stylish. I take it as a great compliment.’

At 5ft 10in Sophie is the same height at the Duchess of Cambridge and they even have the same taste in clothes.  Sophie splashed out on a new dress from a high street store only to see Kate wearing the same outfit in a glossy magazine.

And just like Kate, clever Sophie scored 2 A’s and a B at A-level.  She said: “I’m amazed to be compared to Kate – she is such a great ambassador for our country.  I will be trying to do the same when I represent Wales in Miss World.”

Sophie manages to beat out 46 other contestants to win the Miss Wales title and her shot at Miss World to be contested in Inner Mongolia this July.  It was only her third beauty contest – she entered to have a change from her business studies degree at Cardiff University.

Kate is a natural role model for women – she is intelligent and kind, with a strong work ethic and an apparently impeccable character.  What do you think?  Let us know in the comments below.