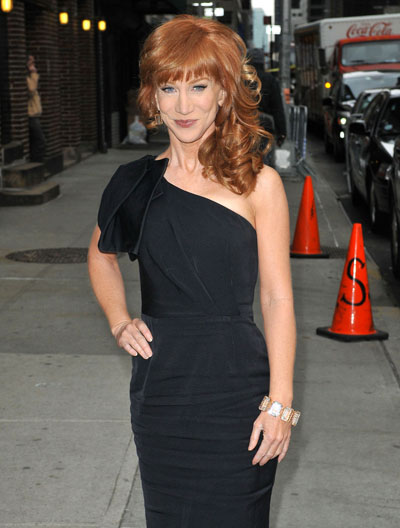 Does anyone think that Kathy Griffin is hot? (Or funny, for that matter?) Because the 51-year-old comedian sure seems to think so!

During a recent appearance on The Late Show with David Letterman, Kathy recounted the story of how she surprised her co-anchor Anderson Cooper on New Year’s Eve by taking off her clothes during their live broadcast.

“I’ll do it right now,” she told David Letterman, who took her up on the offer to strip on national TV again.

The My Life on the D-List star then proceeded to awkwardly take her dress off, a task that was made more difficult by the dress’ one-shoulder construction and the fact that she had to ask the talk show host to help with her zipper.

Kathy finally got the dress half-way off and showed off her bra and a sliver of her underwear-less lower half!

“I didn’t wear underwear because I didn’t want panty lines,” she explained, in case anyone had mistaken her pasty backside for a pair of really, really sheer Spanx.

Watch the most uncomfortable striptease ever in the video below.