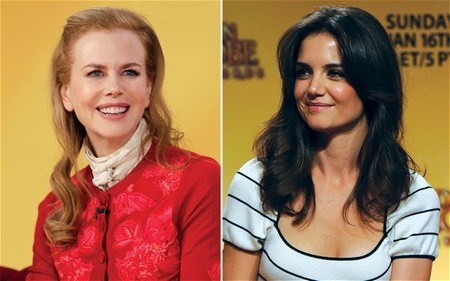 Nicole Kidman and Katie Holmes both hold the dubious honour of having been married to the poster boy for insanity, Tom Cruise. Interestingly, both split from Tom when they turned 33.

Nicole’s divorce from Tom in 2001 turned into a media mud-pie, filled to the brim with speculation, rumours and turn of the century hair styles. Nicole was also “cut off from her kids” and the divorce turned into a bigger speculative secret than Roswell.

The moment the bombshell dropped that Tom was divorcing Katie, entertainment writers clung to their computer screens like teenage girls who just found the first ever nude Justin Bieber picture. A few writers flung themselves off bridges and buildings, out of scary desperation to find the latest breaking news about the divorce. We were prepared to see a battle of the ages, with images of Katie hysterically crying and Suri Cruise looking worse for wear.

In true hype fashion, nothing actually happened and within eleven days after the announcement, it was over. The legal teams came to an agreement and people went on with their lives.

A joint statement from the couple said, “We are committed to working together as parents to accomplish what is in our daughter Suri’s best interests. We want to keep matters affecting our family private and express our respect for each other’s commitment to each of our respective beliefs, and support each other’s roles as parents.”

It is believed that Tom gained visiting rights with Suri, even though there were reports that Katie received full custody.

This is a flip sided comparison with Tom and Nicole’s divorce over eleven years ago. Their divorce was nasty and neurotic and Nicole Kidman went hysterical. In 2007, Nicole admitted, “My kids don’t call me Mommy, they don’t even call me Mom. They call me Nicole, which I hate and tell them off for it.” That is exceptionally disturbing.

Katie said of her stepchildren, “[Tom’s] first two children are incredible, really smart and kind. They call me ‘Mom’.” That is exceptionally weird.

Why was Tom’s divorce to Nicole so earth shattering? Why did things blow over so quickly with Katie? We’re not sure, but what disturbs us most is that both of these women had to endure a marriage to a man who smiles like Ted Bundy.  Let us know your thoughts in the comments below.