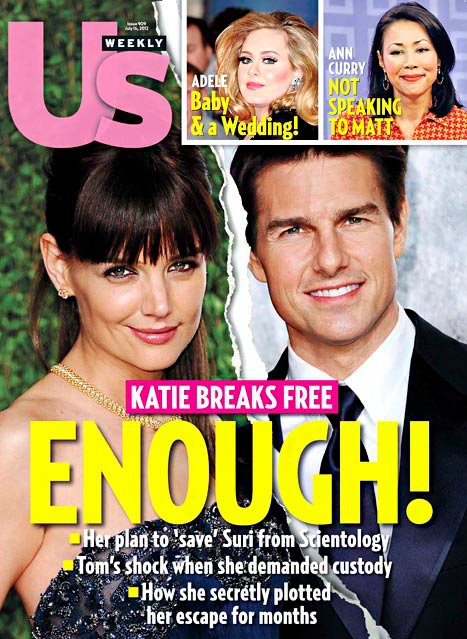 Katie Holmes’ life was a nightmare with Tom Cruise and she had to break free. Sources close to Katie say that she was being monitored and controlled – and even plotted against by the minions of Tom and The Church of Scientology. Katie felt like Mia Farrow’s character, Rosemary Woodhouse, in the creepy horror movie ‘Rosemary’s Baby’ in which an innocent young mother is forced by a satanic cult to bear the child of the devil.

We can easily see Scientology as the satanic cult and Tom as Rosemary’s crazed husband, Guy Woodhouse, played in the film by the late great John Cassavetes – we can even see the convicted child rapist, Roman Polanski, as the director, (whoops – he was the director), but hopefully Katie doesn’t think daughter Suri Cruise is the devil’s spawn!

This report is the cover story of this week’s edition of Us Weekly  – ‘ENOUGH – Katie Breaks Free!’  “Every move she made and everything she did was controlled . . . She felt like she was in Rosemary’s Baby,” says one insider.

“This is about protecting her daughter,” the insider explains to Us. “She wants to be in charge of how Suri is being raised and didn’t want her to have an exclusively Scientology education.”

The first source puts it more bluntly: “She felt she had to get out to save her daughter.”

The question I have is who will save Katie from the wrath of Scientology?  This has got to be their biggest crisis since the death of founder L. Ron Hubbard – he was the man who said before inventing Dianetics/Scientology ‘if you want to make a million dollars start a religion.’  You just have to laugh.

Us Weekly promises to deliver the goods on the hidden story behind Katie’s filing for divorce in their print edition: For more on the biggest divorce shocker of the year — inside their rigid marriage, their final blowout fight, how Cruise is “flipping out,” how Holmes “got the strength to do it”

The cover also promises to discuss Adele’s Baby and Wedding – for those who are interested…  Remember when weddings tried to come before babies?  Yes I am ridiculously old-fashioned.

We will also be treated to details of the feud between Ann Curry and Matt Bauer – According to the Us Weekly cover Ann is not speaking to Matt!  I wonder why not?  From what we have learned Matt’s own wife. Annette Roque, is barely speaking to him…