Katie Holmes Is On The Hunt For A New Man, Find Out Who She Has In Mind! 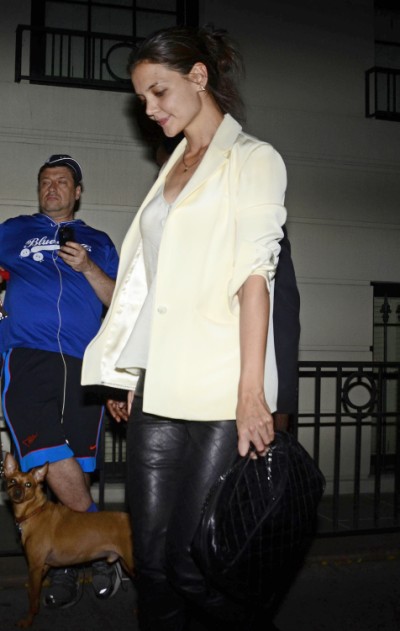 Newly single Katie Holmes isn’t wasting any time consoling herself over Ben and Jerry’s and Cheez-Its late at night while watching Fatal Attraction a la Bridget Jones. Instead, girlfriend is single and ready to mingle and sources say some of Hollywood’s favorite sons better way out because a whole new Katie is coming out to play.

“Katie still can’t believe she’s finally free to make her own choices,” a friend told Now magazine. “She’s been lonely for a while with Tom’s long absences on film shoots and she’s aching for some company.”

What company, you ask? How about Jake Gyllenhaal, John Mayer and even Zac Efron. Kind of sounds like an audition, doesn’t it? Maybe she picked up more Scientology tricks then she’s willing to admit. It’s been whispered that Scientology is already auditioning women to be the next Mrs. Cruise so Tom Cruise’s d-ck can swagger again and not continue to be a laughingstock.

What do you think of Katie’s new boyfriend rebound list? Two out of the three are serial players to me and only Zac has a good, long track record of a solid relationship. But he’s too young, right? Maybe Katie wants to be a cougar and the dom in a relationship. Could you see Zac as a sub? I totally can if he keeps sporting that nasty facial hair.

Anyway, I thought this was all moot anyway since Katie was hooking up with her old boyfriend, Chris Kline again. They were even engaged back in the day. He’s never quite rebounded from her and they were so cute. I don’t think time has been that kind to him though.

Who do you think Katie should move on to? Do you want her to settle down right away or should she play the field for awhile and enjoy her freedom a little while longer?