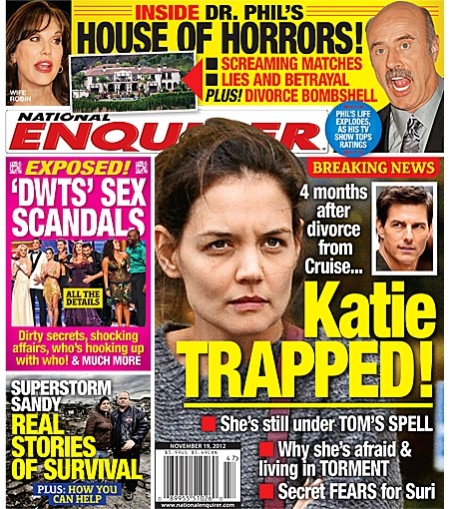 The National Enquirer has a great cover this week featuring Katie Holmes and Tom Cruise. It appears that though Katie has moved on and is battling Broadway and hurricanes in NYC, she’s still terrified by Tom and trapped under his spell!

The breaking news story says Katie is living every day in fear and still worries about Tom’s influence over daughter Suri. What influence? He never sees her! But is this why Katie is joining Tom in Telluride for Thanksgiving? I heard those rumors and wondered why Katie would put herself through that when she can’t stand him. We’ll have to pick up the issue and see what the Enquirer has to say about that!

And speaking of Frankenstorm Hurricane Sandy, the magazine also covers the real heroes and stories of survival from those horrible few days. Check it out to read the gripping accounts and view the unbelievable photos taken during the storm by real people who banded together to protect one another and their property from the frightening freak of nature.

And onto less heroic people and the Dr. Phil divorce rumors. Some people are just too damned rich for their own good. As Puffy so wisely said, “Mo money, mo problems.”  It turns out that even after buying a $30 million palatial mansion, the McGraws are still at each other’s throats and on the verge of a total marital breakdown. You must not be communicating Dr. Phil! How can you effectively in a 14,000 sq ft home?

“Phil’s got a likable on-screen persona, but behind the scenes, TV viewers would not recognize him. With Robin at home, he has an ugly Jekyll-and-Hyde personality,” a source told the Enquirer. “I think Dr. Phil thought he could buy Robin off by getting her a big new house. He figured that would let him off the hook so he could go off and do his thing, and she’d leave him alone. But that didn’t work.”

Poor Dr. Phil! How can he help other people if he can’t even keep his own wife happy?

And lastly, there’s a Dancing with the Stars sex scandal! That sounds about right. All those skimpy clothes and all-day sweat sessions. I could definitely see some hook-ups happening. But with who – Kirstie Alley and Maksim? Oh, we can only dream!

So what do you think? Is this Enquirer worth picking up? It doesn’t have a Kardashian on the cover like all the other tabs this week so it’s got that going for it. I actually think there might some truth to the Katie Holmes story so I’m intrigued! Is Katie Holmes trapped?