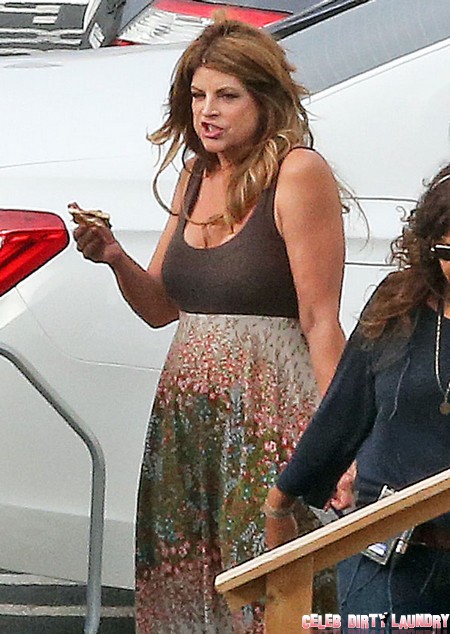 Way back in 1989 Kirstie Alley and John Travolta starred in a campy comedy called Look Who’s Talking and according to Kirstie, he was and still remains, the love of her life. Supposedly the two generated a ton of heat but never ended up in the bedroom at first out of respect for her marriage to Parker Stevenson. Later while filming two sequels, John was married to Kelly Preston, which presented another road block to the ultimate Kirstie and John love fest.

Kirstie decided to divulge her feelings about John to Barbra Walters on last night’s episode of 20/20.  She and John still remain close after all these years, thanks in part to their mutual obsession with Scientology. I have to wonder how her disclosing all of this in an interview on national television will affect her relationship with John and Kelly now!

Maybe he appreciates it. If a woman like Kirstie comes forward and says that they wanted to hook up and fought the sexual tension then I guess it makes him look a little less gay, right? Here’s a woman semi-confirming that John bangs women. Usually it’s a guy coming forward to feed information to the press so at least this time around, according to Kirstie, he might be a little into women.

Do you think Kirstie should have announced that John is the love of her life on television? Do you think that it’s just her way of being honest and not giving a crap what people think, or was John aware that the disclosure was coming? Better yet, why do you think she has been so drawn to him for all of these years?  I know a lot of women have absolutely swooned over him, but I’ve never really understood it- do you? Tell us your thoughts in the comments below!

Editor’s note: Kirstie and John had about as much sexual tension as she does now with Max Chmerkovskiy on DWTS, which is none.  Kirstie is simply doing the right Scientology thing – yep, she’s trying to be John’s beard – but it’s too little and too late. John is clean-shaven for the duration.