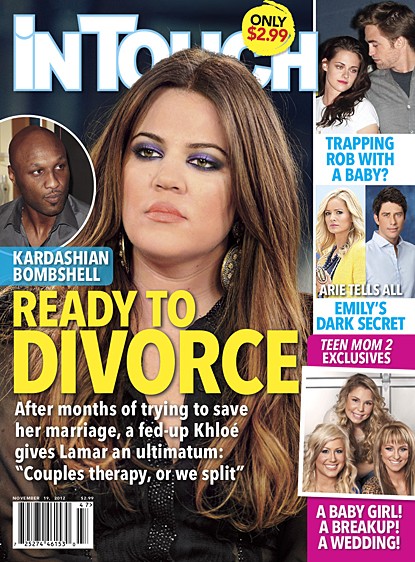 The tabloids are going full speed ahead with the Lamar Odom And Khloe Kardashian divorce theme. Khloe’s on another cover this week fearful that her marriage to her NBA star is almost dunzo for good. But she’s not giving up on her man that easily. According to In Touch Weekly, Khloe is forcing Lamar into couples therapy and she’s threatening to leave if he doesn’t play along!

“She’s begging Lamar to go into couples therapy,” an insider told the magazine. “He’s been so distant and stressed with basketball lately. She doesn’t know what else to do.” Hopefully they film it so we can all be a part of the healing process.

In other In Touch news, Kristen Stewart is planning to trap Robert Pattinson with a baby! So is this why she’s been harping on about wanting to be a young mother lately? I wonder why she feels the need to trap him. With the loved up Robsten 4-EVA publicity tour they’re running it doesn’t seem like Rob needs to be convinced to stay with her at all! I would like a little bambino running around though. It would take this story to a whole other level.

And finally, Teen Mom 2 star, Leah Messer loves living in a trailer in West Virginia with her babies so much she’s decided to chain her leg to one permanently. She’s pregnant again and absolutely delighted. Leah’s welcoming another daughter with new husband Jeremy Calvert. I’m a little bummed about this. Was I the only one holding out for a Leah and Corey Simms reconciliation? I loved Corey and his aw shucks personality. Maybe it’s better he got out while he could though. I heard Leah was having all these babies because she was hoping for a spin-off. Stupidity should never be rewarded! Just ask the Octo-mom!

Do you think Lamar will go to couples therapy if Khloe Kardashian demands it? Lamar’s a good guy. He’ll make it happen if Khloe thinks it will help their marriage! What do you think of this issue of In Touch? Are you excited for the stories? Do you really think Khloe and Lamar’s relationship is in trouble?