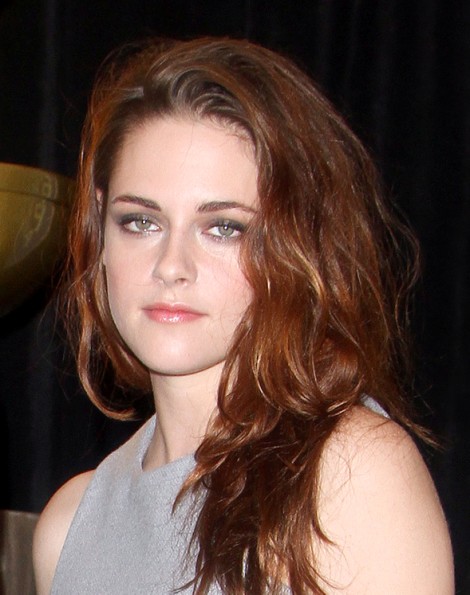 Finally! A reporter had the balls to ask Kristen Stewart about Robert Pattinson!

Wednesday morning on the Today Show, Kristen Stewart was confronted about her dramatic relationship status. “Fans follow your life and they want to know, are you back together with Robert Pattinson?” Savannah Guthrie inquired.

“Funny you mention that,” Kristen responded. “I’m just going to let people watch whatever little movie they would like to think our lives are, and keep them guessing I always say.”

Obviously it wasn’t funny that Savannah should mention it. She probably got the go-ahead from Kristen’s people before the interview even started. Kristen doesn’t handle interviews, let alone on the spot questions, very well so there’s no way in hell her people would let something like that show up announced (although they have been plenty incompetent before).

So case closed. The Twihards have won. Whether it’s a showmance or not Kristen and Rob are blissfully back together. If they weren’t, there’s no way Kristen would have allowed the question. And it’s about time too. Everyone’s been pussy-footing around Kristen and letting Rob tackle most of the “hard-hitting” journalists. Summit producers must have been on her to stop making out with Rob behind ridiculously short bushes and start putting her mouth where their money is. But was it enough? What do you think of Kristen’s big, evasive  response? Does she owe the Twihards more after ruining a couple months of their summer? Should she have shouted her love from the rooftops?

I kinda feel bad for Kristen here. More than anything Kristen wants to be a respectable movie star, right? She’s made it quite clear she’s moving away from Twilight with edgier roles. Cool. Good for her. But rule No. 1 from major stars like Tom Hanks and Denzel Washington and even Cate Blanchett is that you keep your private life private so your personal life doesn’t leak on screen. Movie goers need to forget that celebrity and believe the character if a movie star wants to evolve and stay in the business. Not many younger stars can pull this off because so much of their success/celebrity has to do with who they are off camera. That’s what makes people like Mia Wasikowska and Jennifer Lawrence stand out. You believe their characters. You watch them because of their talent – not their drama. Kristen is desperate to prove she has one and not the other. She might fidget and smile for the reporters now but you know she’s got to hate the fact that it’s come down to this – making nice and pimping her relationship with Robert Pattinson. Damn you Rupert Sanders! Damn you again!

What do you think of the Kristen Stewart reveal? Was it enough or will it come back to haunt her?