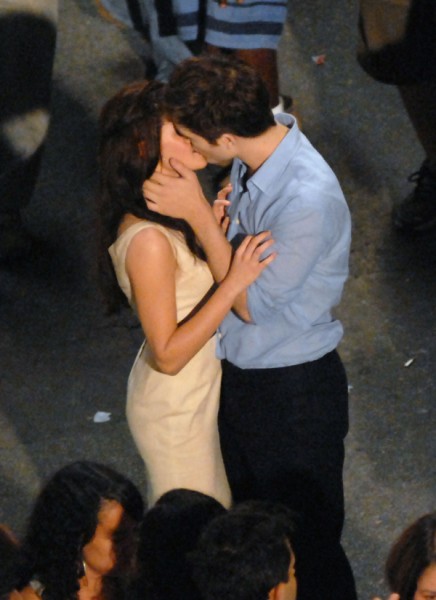 I knew something was off. I just knew it! Days after Robert Pattinson and Kristen Stewart made out and snuggled by the pool at Kristen’s new LA house, people are calling into questions the relative ease at which photographers were able to get that kiss seen round the world.

Critics have pointed out that the timing of the couple’s reconciliation is just too suspect since Rob left today to start his promoting for the final Twilight movie. First Rob allegedly forgave Kristen for cheating and they got back together but people bitched there weren’t any pictures. Hello Ye Rustic Inn! Then people bitched the couple looked miserable together. Hello kissing by the pool behind really really short shrubs!

But nevermind all that says Lainey Gossip. The proof is in the photographers. “On Wednesday it was reported she bought a new home close to Pattinson. And on Thursday pictures of the two hugging and kissing at that home were purchased and published exclusively by our friends at PopSugar….

“The photo agency representing these images is AKM-GSI. It’s the same agency that often shoots LeAnn Rimes when, you know, she’s engaged and she just happens to be gazing out at the ocean with Eddie Cibrian’s arms around her and the ring in full view. It’s also the agency that shoots Megan Fox when she gets married in Hawaii, top secretly, or when she’s pregnant in Hawaii and the bump is unmistakable and her husband is kissing it.

“You know this, I know you do. That celebrities stage photos or arrange to have their photos taken ‘candidly’. That they engage the paps to help disseminate their message.”

So Kristen Stewart is LeAnn Rimes now? HARSH but awesome at the same time. I never thought Kristen would pull these shenanigans. I always got the sense that she prided herself on being above it all but fooling around with your director strips you of the moral high ground I guess.

But this doesn’t prove anything really. Kristen and Rob could truly be back together and staging photos to make sure the Twihards know and are on board. But they also could be broken up and faking the photos for the same reason. Again, this is a wait and see thing but at least it keeps getting interesting!

Were the Robert Pattinson and Kristen Stewart kissing photos staged? Why do you think Kristen and Rob would do it?