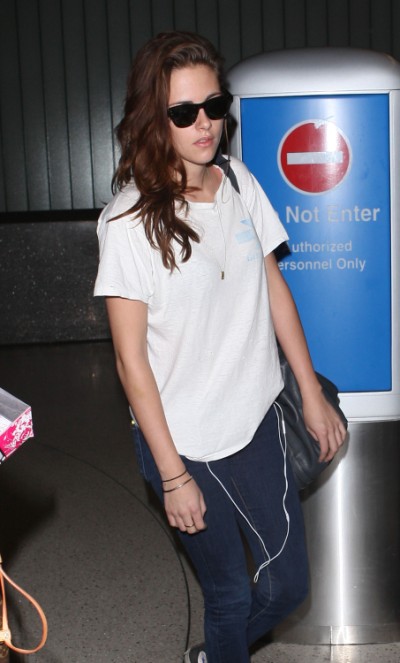 Despite reports that she’s back with Robert Pattinson, Kristen Stewart is still sulking and hating herself. I’m sorry but it’s getting old. Kristen needs to take responsibility for cheating on her boyfriend. But it continues to be obvious that Kristen Stewart blames Robert Pattinson for her failure to stay happy! She literally called herself a miserable c*nt in a recent interview. Whether it’s true or not (and I know where a lot of you stand), who does that? And why does Rob put up with being her whipping boy?

“I’m a miserable cunt! I’m not sure if I’m most happy when I’m comfortable and content or when I’m pushing myself to the limits. There are such different versions of happy. And I really appreciate both,” she recently told Britain’s Marie Claire magazine.

At first we were puzzled as to why Kristen would cheat to begin with but all her recent interviews suggest she doesn’t know how to stop, slow down and appreciate when times are good. She’s a happiness sabotager! In July my Celeb Dirty Laundry sister Jeanne Adams wrote a great article about how Rob and Kristen’s hectic lifestyles were taking a toll on their relationship. She quoted showbizspy.com:

“They’ve both been very busy with their various work commitments over the past few months, so they rarely get to see each other.” But when they do manage to be in the same city, all the couple do is get all crusty over petty annoyances. “However, when they do see each other, they end up fighting over little things. For example, Kristen hates it when Rob messes about on his phone when they’re in bed. And Rob hates it when Kristen texts at the dinner table!!”

Jeanne also speculated Robert could have been jealous over Kristen’s skyrocketing career and that could have been a motive for her to stray. But there is no good reason to cheat! Kristen and Robert are not married. If she had doubts about the relationship she could have just simply broken up with him.

I can’t help wondering what it is about her that Robert finds attractive. From the beginning of her public life Kristen’s image was that of a tomboy. When I saw her for the first time in Panic Room I thought she was a boy! We see Kristen on the red carpet trying to be glammed up but it doesn’t work. She still looks like a tomboy but only in a dress and Chuck Taylor sneakers. Kristen needs a makeover by the Glam Fairy Alexa Prisco and her team. Alexa’s work transforms her clients from their blah existence into their inner goddess, inner sex kitten or their fantasy look. I’ve seen some gorgeous fashion photos of Kristen but in real life she’s still a tomboy.

And what is it about Kristen that enthralls Robert and her fans? It seems Kristen is attracted to roles where she is pensive and every time we see pictures of her she rarely smiles. Does Robert secretly have a thing for wet blankets? Do people see a part of themselves in her? I just don’t get it. Why isn’t Kristen Stewart happy?