Kristen Stewart and Robert Pattinson Texting Each Other — And it’s an Epic Disaster! 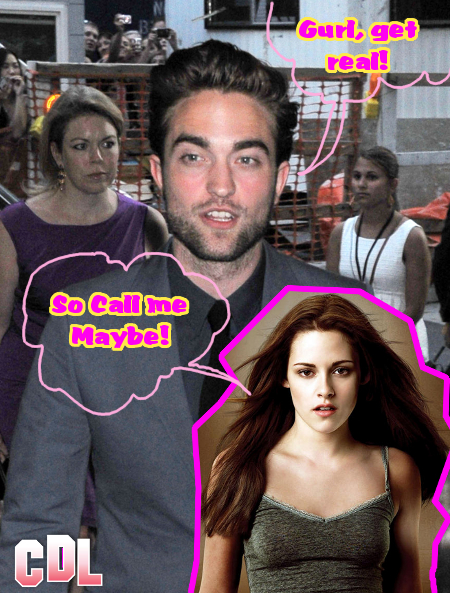 We thought Kristen Stewart was starting to clue in on the fact that she and Robert Pattinson were over, but apparently she still believes she has a chance at reconciling with the man whose heart she crushed after she cheated on him with Rupert Sanders. In Touch Weekly reports that Kristen Stewart and Robert Pattinson have been texting and e-mailing each other back and forth. How do y’all think this is turning out? If you think it’s turning out to be a hot mess/epic disaster/not a good idea then you are one hundred percent correct.

A source reports that our lil’ K-Stew situation has been sending Robert melodramatic texts and e-mails that are proving to be a desperate attempt to re-kindle those romantic flames. Of course her messages contain beautiful prose, which include small nuggets of poetic-gag-me-now gold: “I can’t live without you!” and “Are you alive? Do you hate me? Are you okay?” some of them say.

If R-Pattz was smarter about all of this, he’d just ignore the texts, but he isn’t letting this be a one-sided dialogue. Robert Pattinson has allegedly been replying with short messages like “Yes. No. Maybe.” Do you find it weird that he’s even choosing to acknowledge her? Wouldn’t you think that, if R-Pattz truly was done with Kristen, that he’d simply delete her messages? Is there *GASP* still something alive and burning and hot between the two Twilight stars?

It’s common knowledge that every Twihard in the world wants to see these two resume their undying love for each other. Not sure if it’s going to happen. However, perhaps there’s still hope, Twihards. Perhaps, with the right amount of chanting and dancing around bon fires, you all can resurrect this dismembered union of vampire love.