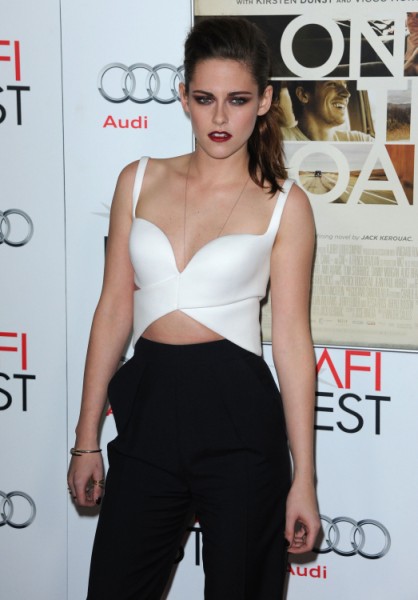 Kristen Stewart keeps flapping her gums about loving babies and wanting babies and kissing babies so we just had to wonder, is Kristen Stewart pregnant and easing us into the know? I know. I know. She definitely didn’t look it at the On the Road screening over the weekend. She looked as prepubescent, yet amazing, as ever. I hate the pants but somehow love the overall look. Only non-birthing hips can make that outfit sing.

But alas, I’m not here to wax on about Kristen’s bold sartorial choices. This post is about babies and how Kristen’s itching for some with Robert Pattinson. Apparently Kristen loved playing a mom to little Renesmee in the last Twilight film and thinks she’d like to play a real one sooner rather than later. “It was one thing about the story that was never difficult to grasp or relate to. Everyone thinks that it’s so peculiar to play such a young mother. It’s really not. I think you’re either born with that or you’re not,” Kristen told US station WOIO. “It was a fun thing to play.”

Exactly – play. Let’s keep it to just that. What is up with all these young mothers lately? There’s Adele and Hilary Duff and now Kristen and Taylor Swift are talking about it. Why can’t people just slow the hell down and enjoy the fact that a baby isn’t hanging off of them for a few more years. Babies seem great and all, don’t get me wrong, but not when you’re in your early 20s. There’s so much to do and be ladies. You’ve got time – especially when you’re still working on a rocky relationship. Kristen and Rob seem to have patched everything up but that doesn’t mean babies are the next step. Go backpack Europe. Get another dog.  Do anything except procreate!

Now, to be fair, Kristen didn’t say she’s ready to test out baby bjorns in her free time. She just mentioned that some people get a calling to be moms earlier than others. Still… I’ve got a funny feeling. But her schedule is packed. Kristen’s career post-Twilight is full. There’s no time for babies right? Right?