Report: Kristen Stewart Pregnant Who Is The Father? 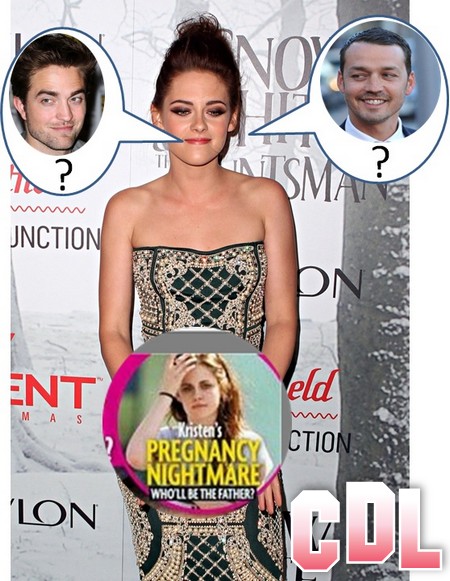 Kristen Stewart has a much bigger problem than her struggling trampire image. In nine months or less the cheating actress just might have a very visible reminder of her affair with her Snow White and the Huntsman director, Rupert Sanders, and I’m not talking about more disturbing paparazzi pics. Star magazine suggests on its August 13 cover edition that Kristen Stewart is pregnant and she’s not sure who the father is!

I never thought I would feel like Maury Povich so much in my life! Could her life get any worse?

With a headline, “Kristen’s Pregnancy Nightmare”, I’m guessing this isn’t a planned pregnancy. But it goes on to wonder who the father could be so I guess Star’s source isn’t sure if it’s Sanders’ baby or not. Obviously with two children already, he has what it takes to get the job done, but Kristen was living with Robert Pattinson during the affair so it’s anyone’s guess who the lucky man is.

If Kristen does end up knocked up this could be the most sensational story of all time in the history of gossip. But I’m not so sold on the idea. Kristen’s buddy and director of Welcome to the Riley’s, Giovanni Agnelli, has been adamant on twitter about Kristen and Rupert never having had sexual relations. Now I feel like Bill Clinton!

Just for gossip’s sake, what if it’s Rob’s baby? There have been hints that the two were procreating. What if they named it Renesmee? Amazing. You know he couldn’t leave her then. Rob would try to make it work for the kid. He’s an English gent like that. So that just got me thinking. Is the baby news just a last minute attempt from Kristen to keep Rob from dumping her? I hear there’s a place somewhere that pathetic women actually do that. I’d say Kristen could fit that bill in her current state.

Do you believe Star magazine’s story? Could a baby possibly be on the way for Kristen? Do you think the news is too crazy to be made up or is this just the media taking the story to its logical, nonsensical next step?