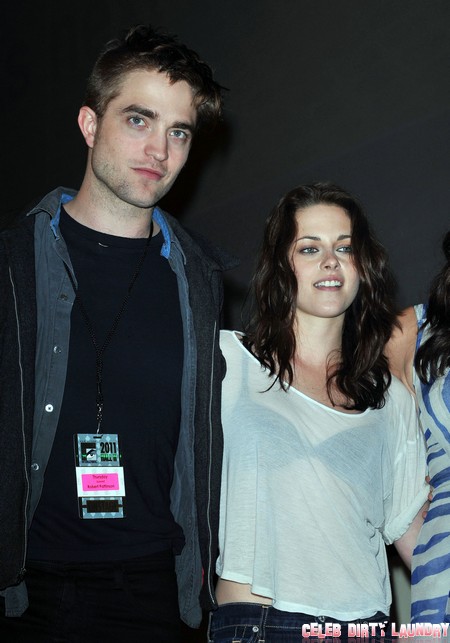 There was another sighting of Robert Pattinson and Kristen Stewart together as they left a restaurant yesterday surrounded by friends/bodyguards.  Of course neither Edward nor Bella looked happy, affectionate, or sincere.  Why would they?  Rob hates Kristen since she shamed him in front of the entire world by betraying him like a cheap tramp and she has always been a miserable bitch anyway.

Robert wore a t-shirt with a massive ‘GERMS’ logo emblazoned on the front – no doubt a direct reference to the Trampire and her spit-swapping with Rupert Sanders.  Of course Rob sees Kristen as diseased now, as does most of the sentient world.  We are not referring to Twihards here – we said sentient, didn’t we.

Rob is being forced to schlepp around a confused and gawky-looking Kristen on this bullshit show of reconciliation and he looks like he wants to punch someone in the mouth – let’s guess whom that might be.

Kristen for her part looked a litter saner than she did the night before outside of Ye Rustic Inn.  In that video the Trampire looked as if she feared Rob would leave her standing there in the parking lot – something he no doubt wanted to do. Yesterday afternoon outside of the restaurant, Kristen’s shorts were undone and falling down. Whether this was supposed to entice a hostile-looking Rob to once again sample her wares or was simply her way of telling Edward that she’ll f**k whomever she pleases, is hard to say.  What’s your guess?  Mine is BOTH!

One thing for sure – you couldn’t find two more miserable looking twenty-something millionaires in California outside of a drug rehab clinic.  If this is Summit’s idea of a putting the showmance back on for all the potential customers of Breaking Dawn Part 2 then they better rethink that plan.  Perhaps they could hire look-a-likes for Rob and Kristen who could be paid to show some affection?

Check out the pics of the miserable pair at TMZ.