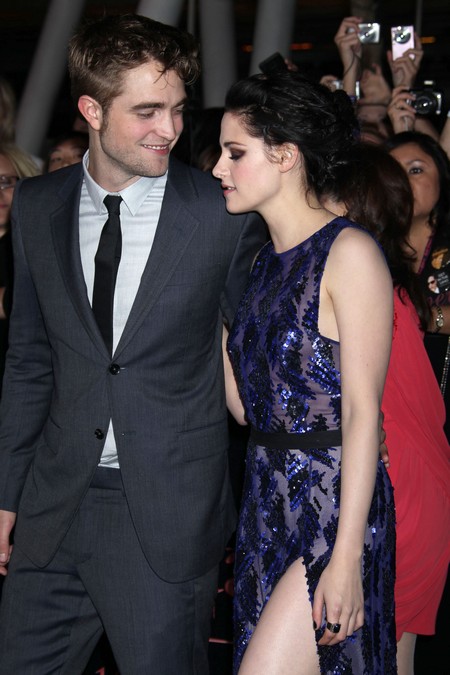 OMG!  Can’t breathe!  Fellow Twi-hards, we here at Celeb Dirty Laundry have some juicy video of Edward and Bella, or Kristen Stewart and Robert Pattinson, out for the first time together since “the incident”.  You know, that thing that happened in July where Kristen Stewart made the biggest mistake of her life by cheating on Robert Pattinson with her Snow White and The Huntsman director, Rupert Sanders; subsequently branding herself a Trampire for life.  Remember now?

Well, rumors have been swirling that the KStew and RPattz were on the mend and several newsmagazines were proclaiming them officially back together last week.  It was only a matter of time before pictures surfaced.  I have been biting my nails and scouring the web for some sort of confirmation.  FINALLY we can breathe a sigh of relief as the video does in fact confirm, in my eyes anyway, that my favorite twosome are happy as can be once again…or are they?

The video shows Rob with his arm around Kristen’s waist.  Wait a minute…that’s not Kristen Stewart!  I’ll have to evil tweet her once I’ve found out who she is.  In any case, Kristen is there on the right with about 6 people between them.  Rob slowly makes his way over to her and it looks like she’s rubbing his chest or ribs, but then it kind of looks like she’s rubbing her own arm.  I got my hopes up for nothing.  Boo.

They do not hug, kiss, or hold hands.  It appears as though they have a short conversation.  “Hey, do you think the paparazzi got enough video of us in the same vicinity?” Then they leave with Rob in front and Kristen following like a puppy.  Totally looks set up and I’d have to add that if they are trying to make it seem like they are back together, for real, then that is the work acting job they’ve done since the first Twilight movie.  I’m not normally this cynical, but the video speaks for itself.  There is no connection with these two anymore.  They break my heart.