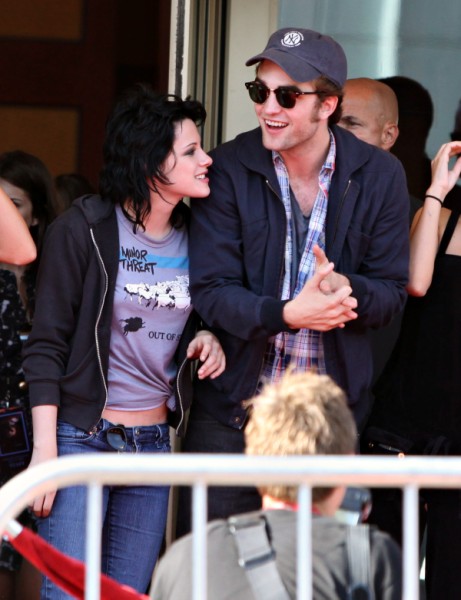 Maybe we shouldn’t be totally convinced by the staged kissing photos and Prince concert appearance? Sources are spilling that Robert Pattinson isn’t completely sold on his rekindled relationship with Twilight co-star Kristen Stewart. It seems he’s still side-eyeing her as she grins from ear to ear, content in the fact that Robert actually took her back. But will Rob’s second thoughts make this reconciliation short lived?

“Ever since he took her back, she’s been like a different person,” a source told In Touch magazine. “She’s so needy. She knows Rob isn’t 100 percent back in their relationship. That’s why she’s being so clingy. No one approves of Kristen. She wormed her way back into his life by inundating him with phone calls and texts [and] writing him love letters begging for another chance.”

Do you sense Kristen as clingy? I could see a girl acting like that for awhile after her boyfriend took her back. “Why didn’t you call?  Are you mad at me? Why don’t you want to come over? I called. Why didn’t you pick up?” So many insecurities about everything and everyone.

That’s got to be the worst thing about getting back together with someone after you cheated. It’s not just the dude you have to convince. You have to win back the family and friends and everyone else who called you a dirty trampire. It’s draining! But this story is mostly full of shit, right? Rob and Kristen are firmly back together. Who knows, maybe they were never really apart. The kissing photos didn’t seal the deal for me – those were obviously paid for by Summit. But the Prince concert reeled me back in. Getting caught by the paparazzi leaving the concert wasn’t planned. That just happened and they weren’t happy about it. If anything, I could see Rob having second thoughts about that aspect of the relationship. Rob and Kristen thought they were harassed before but they have no idea what they are in for now. Maybe all this will die down after the movie’s out but public fascination is still so high. If that doesn’t put wear and tear on a shaky relationship, I don’t know what will.

What’s more believable – the fact that Robert Pattinson wants to break up with Kristen Stewart again because she’s clingy or because they can’t do anything together without being hounded?