Kristen Stewart Afraid Someone Is Going To Kill Her 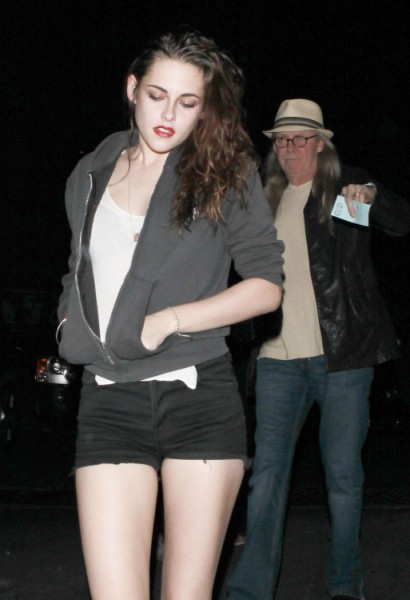 When you think of Kristen Stewart you might picture oily hair, a nasty pout and stained shirts – oh, right and getting caught cheating on Robert Pattinson. What you don’t necessarily think of is trepidation but the Twilight actress is coming clean on her fears that social media has put her in life in jeopardy and there’s nothing she can do about it.

In the recent e-book, Robert Pattinson, Kristen Stewart, Taylor Lautner – In Their Own Words, Kristen told writer, Talia Soghomonian, it’s getting more and more difficult  for her to protect herself. “Nowadays it’s harder because everyone is on Facebook and everyone knows where you are all the time, and everyone’s twittering,” she said. “Like I’m going to die because somebody is going to say where I am and somebody is going to kill me. Someone’s going to twitter my location and then it’s going to be like, boom.”

But is Kristen a bit dramatic or do you think she has a point? I believe there’s some truth to her bitching and moaning. Have we forgotten the crazies that came out of their parents’ basements after news struck that Kristen cheated with Rupert Sanders? These people live and die for Twilight.

Still… I appreciate her candor but… settle it Kristen. You’re 22 and John Lennon you are not (though I should point out a person’s popularity/celebrity isn’t based on how much crazy people want to kill them). Sometimes I just want to shake Kristen and say, “Stop being so serious! Enjoy your charmed life you psycho! Not every interview has to be so ho hum! Tell a damned joke!” But then I remember some people are EEyores and some people are Pooh Bears and it doesn’t take a genius to figure out Kristen doesn’t gorge on honey.

What do you think of her quote? Is Kristen Stewart afraid of her fans or people in general? Are you more empathetic towards her now? Is that a way to live?