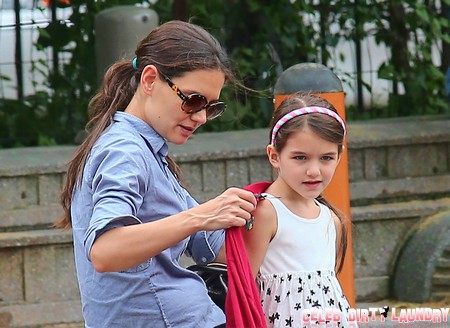 The divorce of Katie Holmes and Tom Cruise took the world by storm—and as quickly as it started, it was over! Suri is officially living with her mom in New York City, where she is enrolled for first grade at Avenues School. We previously reported that other parents were worried about the affect the celeb family would have on the school—specifically the presence of 20-40 aggressive paparazzi waiting outside every morning! We’ve also heard that Suri will probably face some bullying.

Today is the first day of school for Suri, and Katie Holmes dropped her off. Suri was seen chewing her fingernails as their SUV pulled into the parking garage at the school. Remember, at a tuiton of $40,000 a year (the annual cost of attending a private university), the school is fully prepared to meet celeb demands of privacy!

Noticeably absent was dad, Tom Cruise. We know that, by the divorce agreement, Katie Holmes has primary custody, but wouldn’t an involved, loving parent want to support his daughter on her first day at a new school? Perhaps Tom couldn’t get time off from his weird Scientology speed-dating interviews? It’s probably better for Suri this way. Tom has proved in his past relationships: unless the kids become scientologist, they’re not treated like family! We reported that Tom is focusing on finding his next Xenu-approved wife!

I hope Suri has fun at school. First grade is all letter practice and art projects, but the other kids may pick on her for having famous parents – or they may show her reverence. Thank heavens the school has a uniform, so Katie can’t dress her in heels and designer dresses!