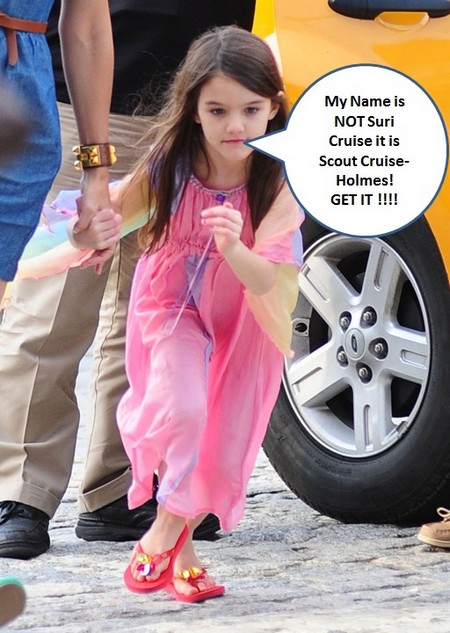 The divorce may have been settled fairly amicably, but it seems Katie Holmes still intends to do everything in her power to separate her daughter from Tom Cruise.  Rumor has it that the 33-year old star intends to change her daughters name!  A source tells Now Daily,

‘She’s been telling friends she wants to make Suri‘s middle name Cruise and change her surname to Holmes,  Katie’s also given the 6-year-old the nickname Scout.  She hates the name Suri, so she gave her a nickname from To Kill A Mockingbird,’ adds the source.

At the time of the divorce settlement, the couple released a joint statement saying that they were working together to do what was in the best interest of their daughter.  Maybe Katie thinks that changing Suri’s name will further distance her from Scientologists.  Or perhaps she simply wants the child to now attempt to live a more normal life and detaching her from Tom in any way possible is the best way to ensure it.  In order to legally change a child’s name, both parents have to agree and sign of on the court order though so my guess is that even though Katie may want to do this, Tom’s just not going to allow it.

This is the first time we’ve heard that Katie hates her daughters’ name.  Do you think that she really hates the name Suri, or is she perhaps referring to the fact that the child carries Tom’s last name?  Do you like the nickname Scout?  I wonder what it is about that name that Katie feels is fitting for her daughter.

Do you think that Katie will step up and legally try to change Suri’s name? Will this estranged couple end up in court one way or another? Tel us your thoughts in the comments below.

Click on the thumbnails below for more pictures of Actress Katie Holmes and daughter Suri Cruise at Chelsea Piers with her mother in New York City, New York on July 10, 2012.